Zinc could be a "golden" bullet for bioabsorbable stents

Some materials dissolve too quickly in the body, and some hang around forever -- zinc, however, may be just right. 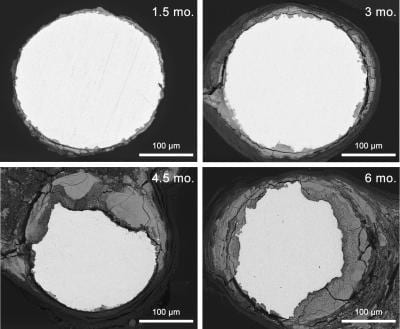 This series of scanning electron microscope images illustrates the corrosion of zinc wire implanted in rats’ arteries at 1.5 months, 3 months, 4.5 months and 6 months. The wires degraded at a rate just below 0.2 millimeters per year — the “magic” value for bioabsorbable stents — for the first three months. After that, the corrosion accelerated, so the implant would not remain in the artery for too long. Image: Patrick Bowen.

In 2012, more than 3 million people had stents inserted in their coronary arteries. These tiny mesh tubes prop open blood vessels healing from procedures like a balloon angioplasty, which widens arteries blocked by clots or plaque deposits. After about six months, most damaged arteries are healed and stay open on their own. The stent, however, is there for a lifetime.

Most of the time, that’s not a problem, says Patrick Bowen, a doctoral student studying materials science and engineering at Michigan Technological University. The arterial wall heals in around the old stent with no ill effect. But the longer a stent is in the body, the greater the risk of late-stage side effects. For example, a permanent stent can cause intermittent inflammation and clotting at the implant site. In a small percentage of cases, the tiny metal segments that make up the stent can break and end up poking the arterial wall.

That’s why researchers are trying to develop a bioabsorbable stent, one that would gradually—and harmlessly—dissolve after the blood vessel is healed.

Many studies have investigated iron- and magnesium-based stents. However, iron is not promising: it rusts in the artery. Magnesium, on the other hand, dissolves too quickly. “We wondered, ‘Isn’t there something else?'” Bowen said. “And we thought, ‘Why not zinc?'”

So they placed tiny zinc wires in the arteries of rats. The results were amazing. “The corrosion rate was exactly where it needed to be,” Bowen said. The wires degraded at a rate just below 0.2 millimeters per year—the “magic” value for bioabsorbable stents—for the first three months. After that, the corrosion accelerated, so the implant would not remain in the artery for too long. On top of that, the rats’ arteries appeared healthy when the wires were removed, with tissue firmly grasping the implant.

“Plus, zinc reduces atherosclerosis,” he added, referring to zinc’s well-known ability to fight the development of plaque in the arteries. “How cool is that? A zinc stent might actually have health benefits.”

There is one drawback. “A stent made of conventional zinc would not be strong enough to hold open a human artery,” he said. “We need to beef it up, double the strength.”

“The good news is that there are commercial zinc alloys that are up to three times stronger,” Bowen said. “We know we can get there. We just don’t want to ruin our corrosion behavior.”

The researchers have filed a provisional patent on their discoveries and are now testing new zinc-based stent materials.