A wrap up of drug carrier designs and their applications

Anna Musyanovych and Katharina Landfester review the production and use of polymer-based drug carriers with particular focus on their use in biomedicine. 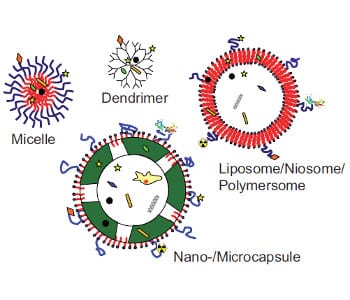 Researchers from Mainz, Germany, review the production and use of polymer-based drug carriers with particular focus on their use in biomedicine.

Since the ‘70s, polymeric materials have been regarded as promising in the production of carriers for healthcare applications. The use of these materials strongly relies on the ability of effectively controlling their size, shape, and chemical properties. Applications include early-stage diagnosis of diseases, drug delivery, bioimaging, and further therapeutic uses.

In a review article originally published in Macromolecular Bioscience and now highlighted in the Best of Macros series, Dr. Anna Musyanovych and Professor Katharina Landfester address the current status of the design of polymeric carriers through the control of their chemical composition and physical properties, as well as their use in targeted drug delivery.

The compilation starts by introducing the major types of polymer-based colloidal carriers in the nano- to microscale (see scheme), describing their properties, production methods and most promising applications. On the lower scale are micelles and dendrimers which, with dimensions of only a few nanometers, can carry hydrophobic drugs, are of particular interest in biomedical imaging and drug delivery, respectively. Liposomes, niosomes and polymersomes are larger vesicles which can bear both hydrophobic and hydrophilic drugs, of potential use in cancer theranostics. Further, the physical properties of nano- and microcapsule shells allow shielded transport of complex substances for biomedical applications.

The authors go on to highlighting the importance of the polymer-based carriers in drug release and drug delivery systems. The mechanisms of drug release are first addressed, where the goal is to control the release (in the case of capsules, the diffusion) of the carried drug as to prolong its effects. In particular, the treatment of diseased sites can benefit from targeted delivery systems: active (where ligands on the carrier surface connect to specific receptors) and passive (where the drug permeates through the carrier surface) mechanisms are presented.

In a final note, the authors remark how the increasing biocompatibility and control over carrier properties are already very well documented, and suggest further research directions. By combining the state-of-the-art knowledge, the synthesis of new smart materials and structures for simultaneous delivery of drugs, and gaining better understanding of how the body chemically reacts to carriers, the future of specific biocarriers for specific ailments seems to be around the corner.

This article is part of the special Best of Macros – Edition 2015 issue, and is now free to read at http://www.best-of-macros.de!

Ultrasound therapy improves the memory of Alzheimer's patients
A nanoparticle vaccine could provide hope for hard-to-treat prostate cancer
Killing cancer with iron
Does the dusk of “old-school antibiotics” mean the dawn of antimicrobial nanomaterials?