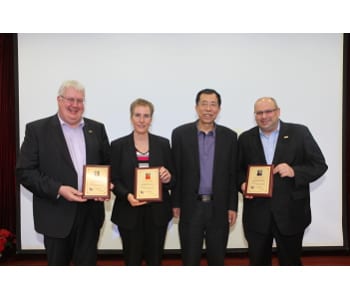 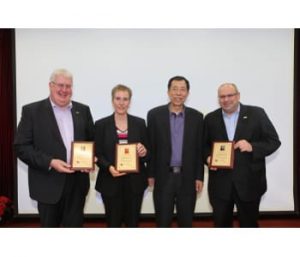 Dr. Jose Oliveira and Dr. Peter Gregory were conferred professorships for their unique contributions to the development of publications in the field of materials- and nano-science at a ceremony on April 3 at Jilin University. The award ceremony was held as part of a scientific symposium.

Academician Professor Shouhua Feng, representing Jilin University, said, “Peter Gregory and Jose Oliveira have worked tirelessly in support of excellence in materials science and nanotech publishing, from which many scientists globally have benefitted.”

Dr. Gudrun Walter, Dr. Oliveira, and Dr. Gregory were awarded professorships on April 4, during a scientific symposium held at the Changchun Institute of Applied Chemistry.

Professor Hongjie Zhang, presenting the award on behalf of CIAC-CAS, said that the awards were in recognition of groundbreaking contributions in support of the publication of chemistry and materials science. Professor Zhang said, “Dr. Walter has, over 20 years, successfully worked to build the Wiley-VCH book programme which is recognised as the strongest in these fields.” On Drs. Oliveira and Gregory he added, “As scientists and editors of leading journals in our field, they have promoted these disciplines strongly in China and elsewhere.”

The National Center for Nanoscience and Technology (NCNST-CAS) and The Institute for Process Engineering (IPE-CAS) awarded honorary professorships to Dr. Oliveira and Dr. Gregory in two ceremonies held at the NCNST and IPE respectively on March 31.

Professor Yuliang Zhao, representing the NCNST, said, “Dr. Gregory and Dr. Oliveira have shown tremendous support to the fields of materials science and nanotech. Their exceptional work has paved the way for publishing excellence in these fields.”

Professor Suojiang Zhang from IPE commended Dr. Gregory and Dr. Oliveira, “They have made significant contributions to the fields of nanotechnology and materials science, particularly though the foundation and development of leading journals which have inspired workers in the field.”

Dr. Jose Oliveira is Editor in Chief of the leading nanotech journal Small and Dr. Peter Gregory the Editor in Chief of Advanced Materials. Both have also been instrumental in founding other related and successful journals in these areas.

Dr. Oliveira said, “It is a great honour and a pleasure to be recognised by such prestigious institutions. We look forward to working with them in promoting good publication practices and excellent materials science.”

Dr. Gregory added, “It has been a privilege to witness the strong growth and success of materials science in China with these institutes playing leading roles. We are very pleased to have our journals associated with their efforts.”

Dr. Gudrun Walter is Editorial Director for natural sciences books at Wiley. She has been responsible for the publication of many books, reference works, textbooks, and encyclopaedias, particularly in chemistry and materials science. Of the professorships, Dr. Walter said, “Book and reference materials continue to play a crucial role in education and research. I am delighted that our work in these areas has been recognised in this way.”