Who wants a defective solar cell?

Professor Bruce Clemens and co-workers have shown that the presence of defects in CZTS solar cells brings about an increase in solar cell efficiency, in contrast to the behavior of classic semiconductor materials. This could lead to the developmemt of a commercially-viable solar cell made of earth- abundant raw materials. 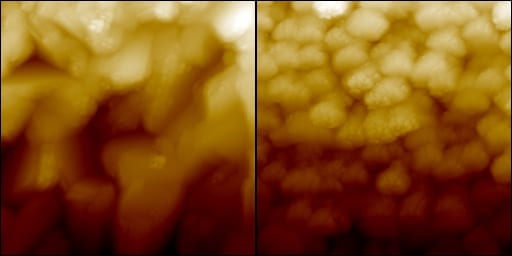 Defying conventional wisdom, the latest scientific evidence says that we all should – and the more defective the better. A growing body of scientific evidence shows that for a some types of solar cells, polycrystalline materials with large numbers of crystallographic defects significantly outperform their almost defect-free single-crystalline counterparts in terms of efficiency. According to Professor Bruce Clemens and co-workers, this phenomenon may have much more general applicability than previously realized, and this finding has fundamental implications for a large class of solar cells of growing importance.

Due to its high efficiency and processability, one of the most studied solar cell materials in recent years is a polyelemental crystal of copper, indium, gallium, and selenium, which is often abbreviated CIGS. Solar cells made from CIGS crystals have been previously shown to have much higher efficiencies when the crystals are in a highly defective state, and one early report of this type of behavior can be found in this paper for the case of CdTe, another material commonly used in the manufacture of solar cells. However, both of these materials are toxic and scarce, which makes their use in widespread production difficult. Elemental indium is particularly noteworthy for its scarcity where it is most often produced as a byproduct of zinc mining and is only present in the earth’s crust at a parts-per-billion level. 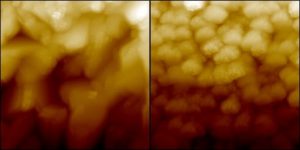 A comparison of the surface topography of CIGs (left) and CZTS (right).

One promising alternative to CIGS replaces the offending elements with zinc, tin, and sulfur, and thus is similarly nicknamed CZTS. By incorporating only these elements which are present in abundance in the earth’s crust, it opens up the possibility of large-scale production of these solar cells and adoption of the technology on a scale that would significantly impact our energy production. The best CZTS-based solar cells today are much less efficient than their indium-containing counterparts, but if the relationship between the number of defects and the efficiency also holds for CZTS, then the roadmap to improve the solar cell efficiency could follow a similar path.

In their study, Professor Bruce Clemens and his co-workers have provided evidence of just such a mechanism by studying the electronic properties of grain boundaries in CZTS. Grain boundaries are where domains of different crystalline orientation meet in a material. These are effectively crystal imperfections, as the crystalline registry at the border does not exactly match between the neighboring grains. Generally, these defects are considered unfavorable because they can degrade the electronic properties of a crystal and contribute to current losses in the case of a solar cell device. Using a technique called conductive atomic force microscopy (C-AFM), Professor Clemens was able to demonstrate that exactly the opposite was true for the case of CZTS, where instead an enhanced photocurrent was produced in the neighborhood of the grain boundaries. The implications of this finding are that the CZTS-based solar cells are far from reaching their efficiency ceiling, and that much improvement can be achieved by using defect engineering to increase the quantity of the right type of crystalline imperfections. By making this kind of material more “defective”, we may be taking the next step towards an inexpensive, efficient, and non-toxic solar cell which is able to produce a significant portion of our energy needs.

Current Decarbonization Plans Will Still Lead to Catastrophe
Printing liquid metals: The next generation of wiring
Creating millions of liters of aviation fuel from captured CO2
Scientists whip up a storm with bird dropping-doped graphene paper