Which way does the solar wind blow?

To many, space weather may seem like a distant concern, but predicting its effects on Earth are important for resilience against potential hazards. 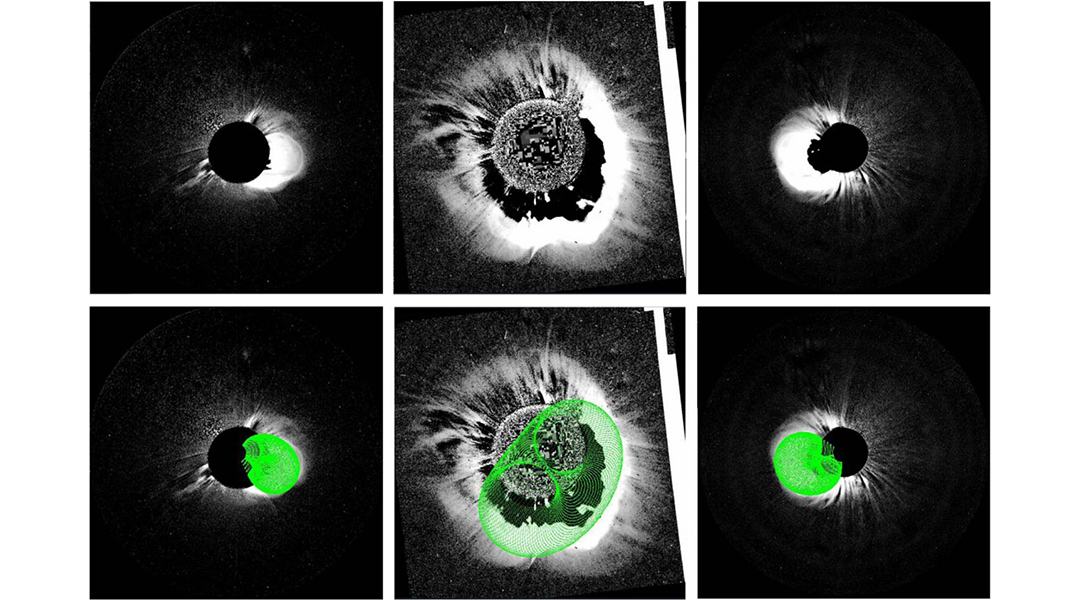 The surface of the sun churns with energy and frequently ejects masses of highly-magnetized plasma towards Earth. Sometimes these ejections are strong enough to crash through the magnetosphere — the natural magnetic shield that protects the Earth — damaging satellites or electrical grids. The scale of this is impressive, however, such “space weather” events can be catastrophic.

Astronomers have studied the sun’s activity for centuries with greater and greater understanding. Today, computers are central to that quest, monitoring the sun’s behavior and its role in space weather events with greater detail than before. However, just as there is a need to predict strong and potentially damaging weather patterns on Earth, predicting potentially catastrophic space weather events is equally as important.

“Space weather requires a real-time product so we can predict impacts before an event, not just afterward,” explained Nikolai Pogorelov, professor of space science at The University of Alabama, who has been using computers to study space weather for decades. “This subject — related to national space programs, environmental, and other issues — was recently escalated to a higher level.”

To many, space weather may seem like a distant concern, but like a pandemic — something we knew was possible and catastrophic — we may not realize its dangers until it’s too late. “We don’t think about it, but electrical communication, GPS, and everyday gadgets can be effected by extreme space weather effects,” Pogorelov said.

The bipartisan PROSWIFT (Promoting Research and Observations of Space Weather to Improve the Forecasting of Tomorrow) Act, passed into law in October 2020, is formalizing the need to develop better space weather forecasting tools. As more missions to other planets and the moon are announced, all will require very accurate predictions of space weather — for the design of spacecraft and to alert astronauts to extreme events.

With funding from the National Science Foundation (NSF) and NASA, Pogorelov leads a team working to improve the state-of-the-art in space weather forecasting.

“This research, blending intricate science, advanced computing, and exciting observations, will advance our understanding of how the Sun drives space weather and its effects on Earth,” said Mangala Sharma, Program Director for Space Weather in the Division of Atmospheric and Geospace Sciences at NSF. “The work will help scientists predict space weather events and build our nation’s resilience against these potential natural hazards.”

Pogorelov uses the Frontera supercomputer at the Texas Advanced Computing Center (TACC) as well as high performance systems at NASA, and the San Diego Supercomputing Center, to improve the models and methods at the heart of space weather forecasting.

Turbulence plays a key role in the dynamics of the solar wind and coronal mass ejections. This complex phenomenon has many facets, including the role of shock-turbulence interaction and ion acceleration. “Solar plasma is not in thermal equilibrium. This creates interesting features,” Pogorelov said.

Writing in the Astrophysical Journal last month, Pogorelov, along with Michael Gedalin of the Ben Gurion University of the Negev, Israel, and Vadim Roytershteyn from the Space Science Institute, describe the role a phenomena called backstreaming pickup ions plays in the acceleration of charged particles in the universe.

Backstreaming ions, either of interstellar or local origin, are picked up by the magnetized solar wind plasma and move radially outwards from the Sun. “Some non-thermal particles can be further accelerated to create solar energetic particles that are particularly important for space weather conditions on Earth and for people in space,” he said.

Pogorelov performed simulations on Frontera to better understand these events and compare them with observations from Voyager 1 and 2, the spacecraft that explored the outer reaches of the heliosphere and are now providing unique data from the local interstellar medium.

One of the major focuses of space weather prediction is correctly forecasting the arrival of coronal mass ejections — the release of plasma and accompanying magnetic field from the solar corona — and determining the direction of the magnetic field it carries with it.

Pogorelov’s team’s study of backstreaming ions help to do so, as does work published in 2020 that used what they call a flux rope-based magnetohydrodynamic model to predict the arrival time to Earth and magnetic field configuration of a mass ejection that occured on July 12, 2012. Magnetohydrodynamics refers the magnetic properties and behavior of electrically conducting fluids like plasma, which plays a key role in dynamics of space weather.

“Fifteen years ago, we didn’t know that much about the interstellar medium or solar wind properties,” Pogorelov said. “We have so many observations available today, which allow us to validate our codes and make them much more reliable.”

Pogorelov is a co-investigator on an on-board component of the Parker Solar Probe called SWEAP (Solar Wind Electrons, Protons, and Alphas instrument). With each orbit, the probe approaches the sun, providing new information about the characteristics of the solar wind.

“Soon it will penetrate beyond the critical sphere where the solar wind becomes superfast magnetosonic, and we’ll have information on the physics of solar wind acceleration and transport that we never had before,” he said.

As the probe and other new observational tools become available, Pogorelov anticipates a wealth of new data that can inform and drive the development of new models relevant to space weather forecasting. For that reason, alongside his basic research, Pogorelov is developing a software framework that is flexible, useable by different research groups around the world, and can integrate new observational data.

“No doubt, in years to come, the quality of data from the photosphere and solar corona will be improved dramatically, both because of new data available and new, more sophisticated ways to work with data,” he said. “We’re trying to build software in a way that if a user comes up with better boundary conditions from new science missions, it will be easier for them to integrate that information.”

Pooi See Lee: “Focus on creativity and teamwork to make an impact"
Only incremental progress at COP26, but there is reason to hope
Is your work not novel enough?
The Role of Narrative in Science