When Polymers Bite Back: A Kinetic Model for Suspension Polymerization 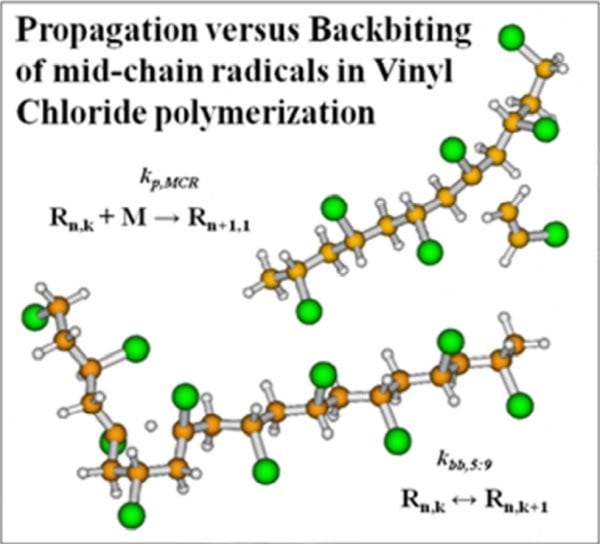 Among the different techniques enabling the investigation of the complex kinetic schemes typical of free-radical polymerization, computational chemistry has been providing appreciable results since the Nineties. In particular, accurate computer codes based on quantum mechanics have been used to estimate the rate coefficients of a wide range of reactions. Attention has been recently focused on reactions not easily observable by direct experimental analysis, such as the so called secondary reactions involving mid-chain radicals. Such reactions determine the microstructural features of the final polymer rather than its macroscopic properties.

In their new work, Davide Moscatelli and colleagues at Politecnico di Milano and ETH Zurich report a computational investigation of vinyl chloride polymerization. Such a system is characterized by a well-known kinetic scheme that includes several secondary steps, which originate relevant defects in the polymer chains. In order to better understand which role these reactions play in the formation of a specific defect (namely, the tertiary chlorine located at the root of branches), reactions of intramolecular chain transfer, chain scission and propagation of mid-chain radicals are studied.

The estimated rate coefficients, together with a simplified polymerization modeling including secondary reactions, enable the reliable prediction of the density of butyl branches, in agreement with the experimental data of commercial poly(vinyl chloride). Moreover, this investigation explains how the distribution of the radical species as a function of their position along the chain is strongly affected by the relative extent of backbiting of mid-chain radicals and how their propagation influences the process kinetics.

The article is published as part of the ongoing series “Sensors, Process Control and Modeling in Polymer Production“, guest-edited by Jose R. Leiza.