When Multi-Subunit Complexes Meet: Replisome-Cohesin Interactions at the Replication Fork 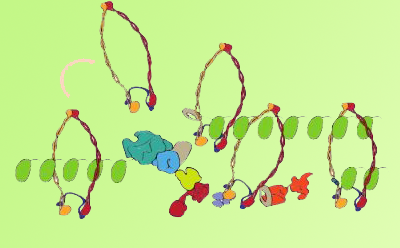 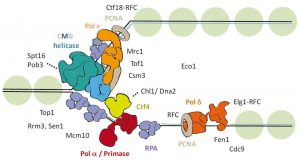 Chromosomal DNA replication involves several complex protein complexes. The replisome, a large molecular machine, is responsible for unwinding the parental DNA and for synthesizing both the leading and lagging nascent DNA strands. To execute these functions, the replisome contains a helicase, DNA polymerases, as well as several associated factors that together make up the replication fork (see Figure 1).

Cohesion of sister chromatids, an important aspect during replication, is mediated via cohesin. This multi-subunit complex is formed by two SMC proteins (Smc1 and Smc 3) and an alpha-kleisin (Scc1) to which the accessory factors Scc3, Pds5 and Wpl1 associate. The molecular mechanisms coordinating cohesin with the replisome are still not fully understood. 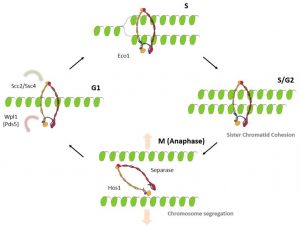 In BioEssays, Sara Villa-Hernández and Rodrigo Bermejo reviewed recent structural-functional insights into cohesin and the replisome. In doing so they provide a molecular perspective on how replication machineries deal with cohesin to achieve a stable association of nascent sister chromatids.

Cohesin is loaded onto DNA prior to S-phase and forms a ring-shaped structure around it. Following replication, cohesin embraces both sister chromatids and holds them together until mitosis. Subsequently, during mitosis, the cohesin ring is opened, releasing the sister chromatids and enabling their segregation to daughter cells (see Figure 2).

As cohesin is already present before the arrival of the replication fork, the question arises how cohesin interacts with the replisome. Several possible models could be proposed (see Figure 3). In the random mobilization/loading model, cohesin is stochastically removed from unreplicated chromatin and unrelated cohesin complexes are independently loaded in replicated DNA duplexes (Fig. 3a). 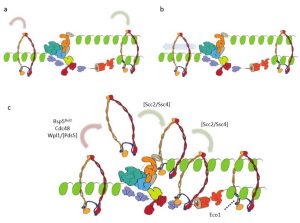 Figure 3: Different models showing the intefacing between chromatin-bound cohesin and the replication fork.

A different model suggests that replication occurs through the cohesin ring (Fig. 3b); however, because of its large size, it seems unlikely that the replisome is able to pass through the cohesin ring unless extensive remodeling of one or the other complex took place. In the third model, cohesin mobilization and translocation to nascent chromatids is proposed (Fig. 3c).

This last model is in good agreement with recent findings, but further studies are needed to get a better understanding of what really occurs in vivo.

An Artificial Cell-On-A-Chip [Video]
The paradox of dormancy: Why sleep when you can eat?
Scientists make ink for 3D printing from pollen
microRNA Clusters as Markers for Cancer