What’s sweeter than a robot made from candy? 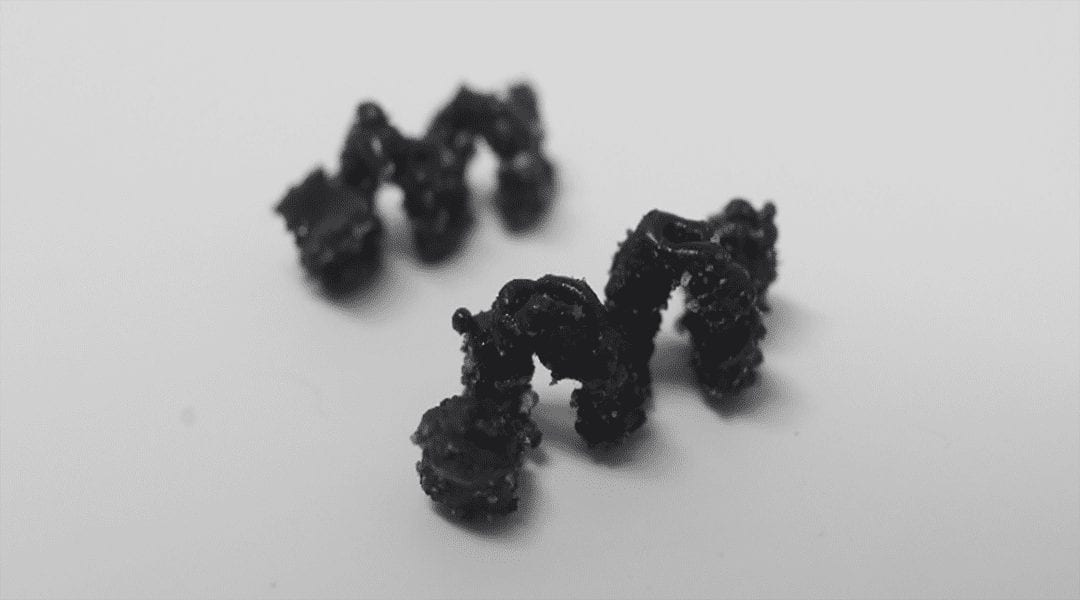 Nanobots have featured heavily in film and science fiction literature, with microscopic robots capable of taking over the mind, providing superheros with enhanced powers, or entering the body to treat and repair injury.

While a dream for many years, research efforts in past decades have led to intriguing examples of real-world microrobots with some of these hoped for capabilities, including as non-invasive medical devices for the diagnosis and treatment of different diseases and pathologies.

“These mobile systems are engineered to improve the efficacy of [therapeutics] and to reduce their toxicity by delivering them at affected sites of the human body,” wrote a team of authors led by Salvador Pané and Xiang‐Zhong Chen of ETH Zurich and Josep Puigmartí‐Luis of Universitat de Barcelona. “While these devices have demonstrated many potential biomedical in vitro and in vivo applications, current designs exhibit limited features that impede their translation to actual clinical scenarios.”

In a recent study published in Advanced Materials, the researchers sought to solve this problem by making microrobots that are more biologically compatible; and they did this by making them out of candy.

While an image of a robotic peppermint candy flying through your bloodstream might immediately come to mind (at least for me it did), the real concept is not as fantastical, though it is inventive.

“Sugars are structural building blocks in almost all forms of life,” said Pané. “Their biocompatibility and biodegradability make them attractive materials for biomedical tools such as small-scale robots. [They] are inexpensive and easily processed materials, thus constituting a sustainable alternative for producing transient devices.” In addition, they also have low toxicity, which makes them ideal for creating disposable carriers of therapeutics.

“A current trend in small-scale robotics consists of developing biodegradable platforms that do not require retrieval after their tasks have been accomplished” said Puigmartí-Luis. “[Our] CANDYBOTS degrade very quick in water, which makes them attractive for applications where dissolution of the device should take place very rapidly.”

To endow their sugarbots with the ability to move within fluids, the team 3D-printed structures made from a combination of sucrose crystal powder and magnetic microparticles made from either barium ferrite (BaFe12O19) or carbonyl iron. During the process, cross sections generated from a 3D model were scanned with a laser, which melted and fused the combined powder into solid pieces. By tailoring the degree of “caramelization”, the mechanical and chemical properties of the sugar structures could easily be adjusted.

“Sugars display a very rich chemistry, which can be exploited to functionalize a wealth of functional molecules, such as therapeutic compounds,” added Puigmartí-Luis. Additionally, the sugars can be treated to make them more resistant to dissolving or to make them softer, which could make them ideal for exploring diseases in which their immediate degradation is not required, says Chen.

The team chose a helical structure for their CANDYBOTS based on the structure of bacterial flagella, which are appendages that protrudes from the body of certain bacteria and cells. They rotate in a cork-screw manner, and act a small propellers.

Using an applied, rotating magnetic field, the CANDYBOTS can be made to swim through fluids, with the aim of having them eventually carry “swarms of particles” for distribution at targeted positions within the body.

“Depending on the disease, the robots can be either orally administered or delivered with a catheter close to the affected site, and then an electromagnetic setup will be used to steer it to achieve the target area” said Chen. “There are critical situations where delivery of agents must occur very rapidly such as in the treatments of stroke or delivery of contrast agents.”

“For treating conditions through the endovascular system, the surface of CANDYBOTS will probably have to be engineered as caramelized sugar may trigger an immune response when they navigate through blood. However, for treating conditions in the gastro-intestinal tract, we assume that a sugar-printed device could be used in a pre-clinical study soon.”

When function follows form: Semiconductors that behave like metals and superconductors
Hybrid conferences, a happy medium
That “junk” DNA … is full of information!
The best of both worlds: Connecting paper books to digital media