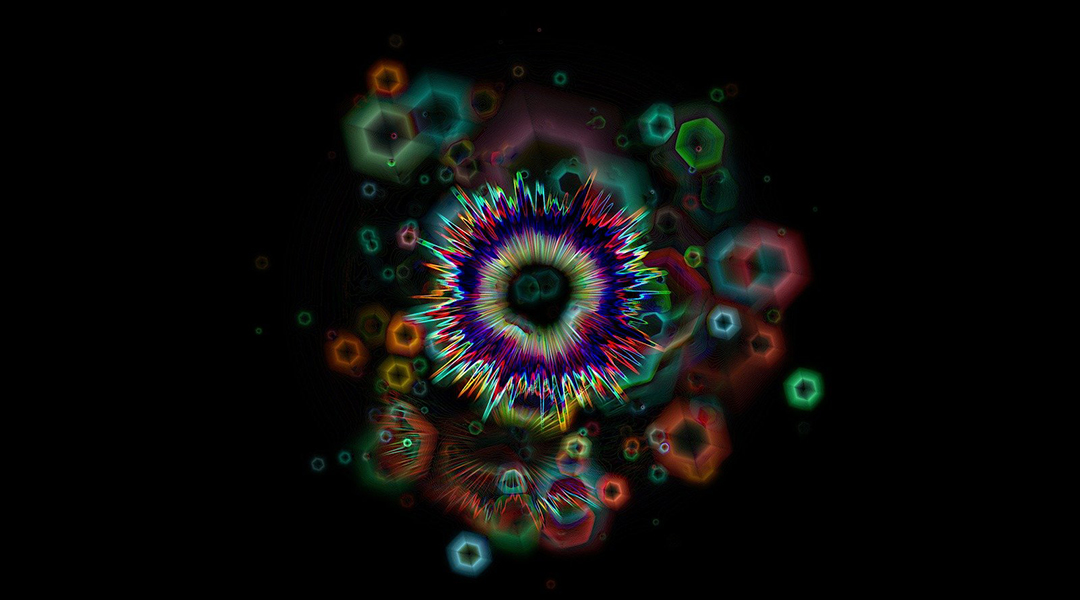 Our understanding of elementary particles and their interactions is based on the Standard Model — to date the most accurate theory developed to describe the properties and physical behavior of all particles (excluding dark matter) as well as those that mediate interactions between them.

The only known fundamental interaction not described by the Standard Model is gravity. Its classical description is provided by Einstein’s theory of general relativity, which treats the gravitational field as a geometry of spacetime. This theory has been used to accurately describe the influences of massive objects, such as planets, stars, and galaxies, on the spacetime around them, as well as to help us understand the evolution of the Universe as a whole.

However, reconciling general relativity’s theory of gravity with the principles of quantum mechanics — a branch of physics that deals with the properties and behavior of objects on the subatomic scale — poses a bit of a challenge.

When we attempt to “quantize” general relativity, we obtain a theory that is valid for a range of energies that describe the interactions between different particles and bodies, but a fundamental theory needs to work for all energies in order to be valid.

Though the quantum effects in gravity don’t play an important role in a majority of physical processes, there are situations when they have to be taken into account. Namely, when gravitational fields are exceptionally strong, such as in the first moments following the Big Bang or near the centers of black holes.

To study physics in such extreme conditions and to complete our understanding of fundamental interactions, the formulation of a quantum theory of gravity is necessary. However, that poses a bit of a problem…

Why is it so hard to study quantum gravity?

The main challenge one encounters when seeking evidence of quantum gravity is a lack of experimental data. Physicists usually study the fundamental interactions of elementary particles with particle accelerators, which smash together beams of particles moving at velocities close to the speed of light. The types of particles born in the collision event, their number, and the angles and speeds at which they fly away can be used to extract valuable information about their properties and interactions.

The key issue here is that the gravitational effects in elementary particle interactions are so weak they are impossible to measure with current accelerators. For example, the gravitational attraction between two electrons is more than 42 orders of magnitude weaker than the electromagnetic repulsion between them.

Due to the difficulty of measuring quantum effects, studies of quantum gravity have so far been only theoretical, yet physicists have been able to come up with a number of viable candidates.

Can quantum gravity be described by string theory?

Attempts to formulate a correct theory of quantum gravity have been made since the 1940s, but progress was limited until the 1980s when a new candidate was proposed: string theory.

String theory’s basic postulate is that elementary particles are not point-like, as in the Standard Model, but are instead tiny, one-dimensional strings. Each vibration or oscillation of these strings corresponds to a specific type of elementary particle, meaning electrons would have vibrations unique from quarks and photons.

In particular, one known string vibration mode has properties that correspond to what many physicists expect from a hypothetical graviton — a particle or string that should mediate the gravitational interaction. However, its dynamics differ somewhat from the particle found in quantized general relativity, where it contradicts fundamental principles of physics and mathematics. In string theory, graviton interactions with other particles are perfectly consistent with these principles, lending viability to this theory as a possibility for quantum gravity.

One of the interesting and most important properties of this theory is that it predicts the existence of ten spacetime dimensions. At first glance, this prediction seems incompatible with our everyday experience in which we can observe only four dimensions: three space and one time. The most widely accepted solution to this apparent inconsistency is that the extra six dimensions are very small and cannot be observed with the experimental instruments currently available to us.

It’s important to keep in mind that this is just one hypothesis of many. Physicists have also proposed other models with extra space-like dimensions, the most popular of which are the Arkani-Hamed-Dimopoulos-Dvali (AHDD) and the Randall-Sundrum (RS) models. In these theories, additional dimensions also exist but they can be millimeter-sized or infinitely large.

A holographic perspective on quantum gravity

Unfortunately, our current understanding of string theory is incomplete. In particular, we don’t know how to derive the geometry of the six extra dimensions from basic principles. This is a very serious problem because the shape of these dimensions affects the details of gravitational interactions at very high energies and temperatures — this limitation prevents us from studying many quantum gravitational effects quantitatively.

Although string theory hasn’t yet become generally accepted, research in the field has led to the development of many theoretical tools, the most powerful and important of which — though still hypothetical — is known as holographic duality or holographic correspondence.

The idea here is that a ten-dimensional universe with gravity is a projection of a lower dimensional universe (like a hologram), which has no gravitational fields within it. Thinking about our universe within the context of this lower-dimensional space helps simplify some of the trickiest puzzles in physics, especially ones that arise when combining quantum mechanics and general relativity.

This is because “describing” this simpler, gravity-free world is a lot easier to do — physicists have a lot of experience in working with such gravity-free theories when studying electromagnetic, weak, and strong interactions described by the Standard Model.

Holographic correspondence has not only made it possible to study the complicated conceptual problems of quantum gravity, but is also being used to describe the observable evolution of our Universe. Scientists hope that further development will allow them to study many more phenomena.

Other theories of quantum gravity

String theory and holographic correspondence are the most popular approaches to unify quantum mechanics with gravity, but there are others.

A well-known example is a theory called quantum geometrodynamics (don’t let the name intimidate you!). This theory, which attracted the attention of researchers as early as the 1960s, treats three-dimensional space and time in slightly different ways in contrast to general relativity, which treats all four dimensions equally within the concept of spacetime. This theory is a quantization of general relativity and is not expected to be correct at extremely high energies and temperatures — such as those found in the very early Universe — but it does make interesting predictions about quantum corrections to classical general relativistic results, particularly in cosmology, which studies the evolution of our Universe as a whole.

Another of these theories is known as loop quantum gravity, where in order to quantize gravity, physicists abandon the concept of a continuous spacetime (as defined by general relativity) and consider it instead as being made up of tiny, discrete building blocks. These are one-dimensional and when intertwined, make up a kind of giant, four-dimensional fabric.

In another similar theory known as causal dynamical triangulation, an elementary chunk of spacetime is the four-dimensional counterpart of a flat triangle. When “glued” together along their faces, these blocks form our Universe and provide a simpler means of quantizing gravity.

The size of these blocks (or spacetime chunks) in both theories is of the order of the Planck length, which is considered the typical scale of any theory of quantum gravity. This length is approximately 10−35 meters, which is about 23 orders of magnitude smaller than the size of an atom.

Other approaches, such as the matrix theory, suggest a radical view of spacetime, where physicists speculate that it may not exist at all and may only be an approximate description of reality. While this approach seems counterintuitive and impossible to work with, researchers can still extract valuable insights from it to make potentially testable predictions. However, in order for these predictions to be more accurate than those provided by other, more conservative approaches, further improvement in the theoretical understanding of this theory or improvement in the numerical methods used by scientists in this field is necessary.

All of these theories have their advantages and drawbacks and none of them currently provide a comprehensive description of quantum gravity. Finding out which one (if any!) is the correct theory requires a theoretical breakthrough or better yet, some experimental evidence.

How will future experiments help us study quantum gravity?

It is almost impossible to study quantum gravitational effects with elementary particle accelerators because their contribution to particle interactions is vanishingly small. However, alternative methods have recently been proposed, the most popular of which are based on gravitational wave detectors.

The most sensitive of these are laser interferometers, which measure the distances between separated mirrors using a laser beam traveling between them. These detectors can register gravitational waves emitted by merging black holes — objects whose behavior is most likely to be largely affected by quantum gravitational effects. When a gravitational wave — a ripple in spacetime — passes through the apparatus, it changes the distance the laser beam must travel in order to reach the neighboring mirror, causing changes in the laser beam that can be detected and measured.

Scientists can compute the spectrum of these gravitational waves, assuming that they are properly described by general relativity, and the discrepancy between the observations and these computations could constitute the contribution of the quantum effects in gravity.

Physicists hope that the next generation of interferometers, such as the Earth-based Einstein Telescope or the space-based Laser Interferometer Space Antenna (LISA) scheduled to be introduced in the 2030s, will provide valuable information.

Another approach is based on the analysis of the cosmic microwave background, which is electromagnetic radiation in space that has existed since the Big Bang. The properties of this radiation, which we can measure, should have been influenced by the processes that took place in the Universe in the very first moments of its existence, when quantum effects in gravity were very important.

Some physicists argue that measured properties in this background radiation confirm the existence of gravitons in the early Universe, confirming the hypothesis that gravitational interaction at the fundamental level is mediated by particles, like other fundamental interactions.

Hopefully, in the future, these and perhaps other not-yet-thought-of experiments will provide us with the information we need to complete our understanding of these fundamental interactions and uncover the very nature of our universe.

The editors at Advanced Science News would like to thank Professor Claus Kiefer, full professor of theoretical physics at Cologne University, Germany, for his contributions to this article.

Revealing what's beyond the 3D curvilinear architecture of reality
What is a black hole?
Does dark matter really exist?
The Unruh effect: Probing the structure of a vacuum