What influences where scarab beetles roll their dung balls?

A numerical model helps scientists understand how particularities of different terrains affect the trajectory and behavior of dung beetles. 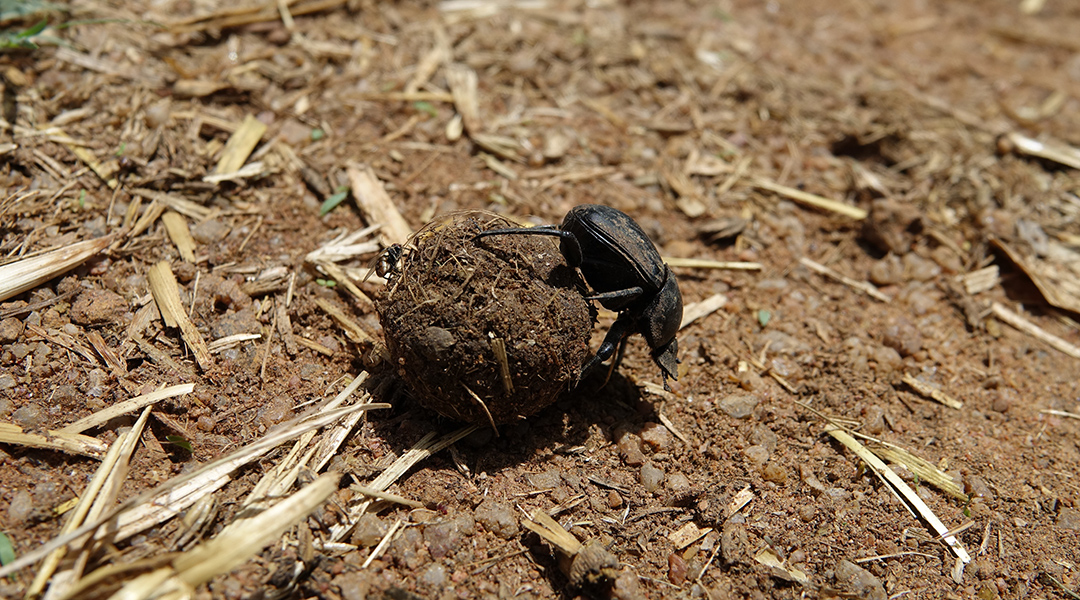 Out in a sunny field scampers a black scarab beetle, making its way toward a coveted dung pile. There, it works furiously to sculpt the perfect-sized ball, which it assembles for its meal or as a gift for potential mates.

But the beetle must work quickly as a number of other dung-feeding insects begin to descend on the pile, attracted to the same food source and creating intense competition for this resource.

While a number of other insects live in and around the pile, telecoprid dung beetles (or scarab beetles) have evolved a unique technique to avoid their competition: they quickly build their ball and then roll it away as far as possible in a seemingly random straight line. Even when confronted with an obstacle, they will strictly adhere to their chosen path, rolling the ball — which weighs 5-20 times the beetle’s own body weight — over obstacles rather than around them.

As part of a recent study published in Advanced Theory and Simulations, Stanislav Gorb of Kiel University and Alexander Filippov from the National Academy of Sciences of Ukraine were interested in exploring how the rolling pattern of dung balls is influenced by the characteristics of different terrains.

“While ball rolling is most effective in open terrains, such as steppes, savannahs, and deserts, telecoprid dung beetle species are native to habitats showing great variability in the soil surface characteristics,” they wrote in their paper. “Even in tropical rain forests with challenging terrains, telecoprid dung beetles are capable of efficient transport of dung balls.”

Gorb says that he and Filippov were at first interested in determining how surface peculiarities affect the motion of material objects, and built a numerical model to help them do so. This was then applied to a real-world scenario.

“When one watches real animals acting in the field, it can cause two opposite limiting impressions,” said Gorb. “The first is that the motion is almost chaotic and can’t be scientifically understood at all. The second impression is that the creatures are extremely clever, all their motions are planned in advance and even ‘mentally’ motivated.”

“However, when we record and/or model their trajectories, we can extract step by step, what natural reasons underlie observable behavior and better [understand] either these particular animals, or common principles which control similar processes in nature,” added Filippov.

The model was formulated as a set of game rules applied to “movable automata”, which simulate the animals, how the surface influences their motion, and how they interact with one another and with the food. Random perturbations were applied to the simulated rolling trajectories to account for imperfections in the dung balls, which are never perfectly round as time crunches at the dung pad often force beetles to minimize the time they spend shaping their balls.

“We ran the simulation and compared the results with the observations and our own impressions,” explained Filippov. “After we would modify the rules and repeat everything again, the simulated behavior started to mirror reality quite closely.”

The model was able to predict the energy spent for dung transportation. The randomness and combined nature of real surfaces led to a wide spectrum of complex trajectories, which the scientists plan to compare with future experimental studies in the field.

“This, in turn, can be used to predict preferable habitats for telecoprid dung beetle species,” said Gorb. “This gives us an understanding of the best adaptation or competitive strategies in natural selection. But, maybe, when one deals with so complex a system, where plenty of the factors are involved, and each of them is essential, the mostly significant finding is that, despite of the complexity, we can reproduce such a system starting from a limited number of well understood and almost obvious simple rules of ‘the game’.”