Long-term and global datasets of Paleolithic archaeologists are relevant for present climate action, and new interdisciplinary alliances are needed to exploit them. 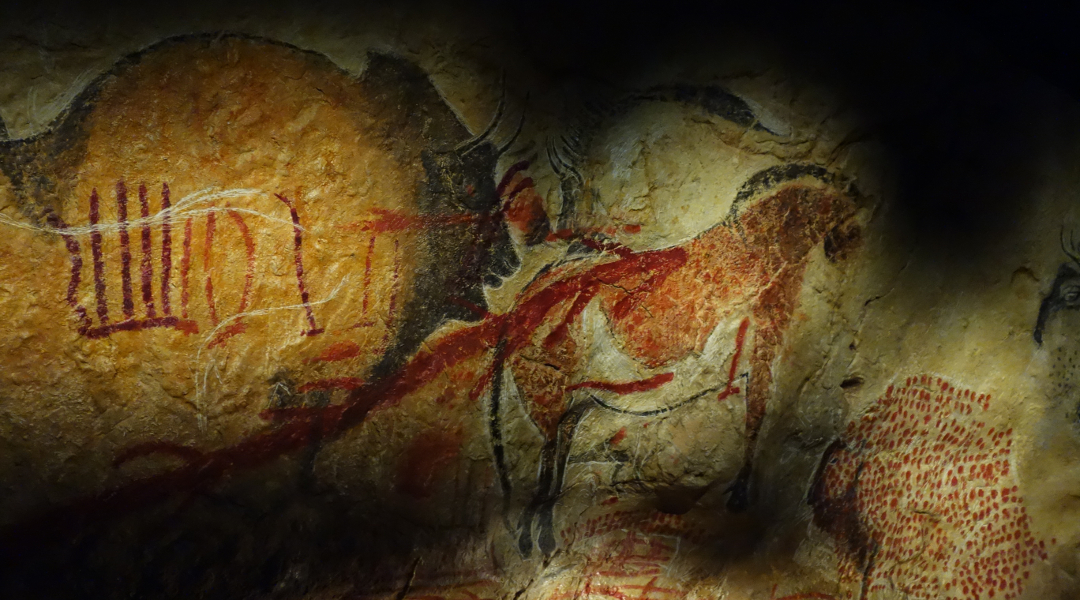 Paleolithic archaeologists study the human deep past, from the appearance of the first stone tool-wielding hominins about 3-4 million years ago to the emergence of Homo sapiens, who now remain the only surviving and globally distributed hominin. Paleolithic archaeologists specialize in the analysis of the behavior, culture, and artefacts of the nomadic human groups that walked the Earth before the dawn of the Holocene warm period, the present geological era.

The Paleolithic period, or the “Old Stone Age”, harbors two of the four defining transitions in human history — the adoption of technology and the invention of culture. Over 96% of the human past took place in the Pleistocene — the geological era directly preceding the present Holocene — and Paleolithic archaeologists have long been interested in how hominin populations and species faired vis-à-vis the often rapidly changing environmental conditions and notoriously unstable climate regimes of this period. Yet surprisingly, and even though climate is routinely investigated as a major driving force of human biocultural evolution, Paleolithic archaeologists had hitherto only little to say about foundational issues in human-climate relationships or how their research and insights may inform ongoing societal debates on climate change and the planetary future of our species.

In a recent overview published in WIREs Climate Change, we argue that concerted archaeological and paleoscientific research has now produced a rich and diversified corpus of data on long-term human-climate constellations which can make a real difference in how we understand human climate change responses and think about uncertain futures of the “Anthropocene” — the period famously proposed by Nobel Prize awardee Paul Crutzen, in which human action can easily develop cascading geological consequences and yields climates and ecosystems never encountered before in human history.

The Paleolithic archaeological record preserves a sweeping “deep history” of human climate-coping strategies preserved in material proxies and biosignatures with an unparalleled temporal coverage (>3 million years), enabling the analysis of human-climate intersections on varying time-scales, from daily snapshots to creeping developments measured by the millennia, some of which are inaccessible to other human sciences.

Paleolithic research not only promotes the systematic mapping of climate change responses under radically changing ecological, material, and sociocultural conditions, however, it has a unique capacity to elucidate the intimate links and co-adaptive dynamics between human history and earth history, including those beyond our easy imagination and what we can grasp by conventional prognosis. The great temporal depth of this lens puts the Anthropocene and its many “technofossils” into perspective, tracing the prehistoric roots of human ecosystem manipulation back into early prehistory and examining the long-term consequences of these actions for ecosystems and human lifeways alike.

The deep history of human-earth system dynamics that Paleolithic research is able to uncover holds important clues and inspirations but also basic lessons and cautionary tales for contemporary climate change quandaries. Yet, because human-climate relations were always anchored in complex multifaceted realities, the “excavation” of this critical information requires a transdisciplinary effort. Just as contemporary climate issues cannot be resolved without the involvement of social science/humanities disciplines’ understanding human-climate relations of the deep past depends on the cooperation and exchange between Paleolithic archaeologists, paleoclimatologists and scholars from the “environmental humanities” — an emerging disciplinary alignment within the humanities dedicated to the study of human-nature relations and the impact of climate change on human societies. We suggest the term “paleoenvironmental humanities” or pEH for short to motivate this enterprise and to push it forward.

The pEH combine the analytical and methodological competence of Paleolithic archaeologists and paleoscientists with the sensitivities and interpretive expertise of environmental humanities’ scholars and extend the discourse on human-climate dynamics back into our preliterate past to include a wider and more inclusive sweep of human experience.

The pEH offer a fresh start for the analysis of human-earth relations in the thickets of deep-time and can help to put aside long-standing biases on the nature of these relationships rooted in anthropocentrism and the continuing polarization of climate marginalization and determination in Paleolithic research. A self-critical, reflexive element has long been missing in climate change research in Paleolithic archaeology or wider human origins studies and scholars have rarely examined their responsibility and power in shaping today’s climate change concepts, narratives and imaginaries.

The pEH make room for this kind of reflexivity and point to the importance of recognizing and criticizing the active involvement of archaeologists in the construction of climate change knowledge and their obligation to remain vigilant in the face of misuse and ideological instrumentalization of the human deep past. This responsibility includes the cultivation of narrative competences and the revision of dated narratives and imaginaries. The pEH imply not just an inclusive scientific stance but also an ethical commitment.

A key impetus of the pEH, and setting them apart from most traditional approaches to climate change in Paleolithic archaeology, is to strengthen interpretation and conceptual analysis to move beyond the search for correlations between climate change and culture change or generic affirmations of the relevance of climate in human history. The question is no longer whether climate matters — climate has always framed human life in significant ways. We urge Paleolithic archaeologists and paleoscientists to turn their attention to the variability of climate impacts in human evolution and to develop a scenario-driven framework through which we can more effectively assess causalities, constraints and other system dynamics that underpin these impacts.

The paleolithic past not only represents an exceptionally rich and diverse archive of human climate change responses, adaptations, and failures, it is a past characterized by climate regimes that fundamentally differ from today’s climates. In contrast to the Holocene — the contemporary or recently concluded geological era — the Pleistocene, in which the vast majority of our Paleolithic past took place, was a period of unstable climates with climate change frequencies and amplitudes defying any historical comparison, including a range of non-analogue climatic and environmental situations which do not sit well with recent instrumental records. Future climates and environments are predicted to again diverge from the established norms of the Holocene so that our future safe “operating space” within the climate of Planet Earth might begin to match that of the Pleistocene better than that of our immediate past.

Given that the Anthropocene is predicated upon novel climatic conditions and ecosystem make-ups, the cataloguing and analysis of a broad spectrum of alternative modes of human adaptation and coping provides an urgently needed resource to reflect upon and administer the future of our species.  Recognizing and scrutinizing the still underrated diversity of past human-climate interactions and the society-dependent role of climate in the making and unmaking of human history is the first step towards this direction.

Just as anthropologists are championing the relevance of so-called Traditional and Indigenous Ecological Knowledge, we promote the use of reconstructed “Paleoknowledge Systems” as an important additional tool for meeting future climate challenges. The Paleolithic past has a lot to offer in this regard since the archaeological record is nothing less than a treasure trove of stories on how our hominin ancestors and relatives — including the still-enigmatic Neanderthals and Denisovans — fared in the face of rapid environmental transformations and ever-lurking climate novelty. By learning from these extinct relatives, perhaps we can evade that same fate.

The combined resources and competences of the pEH may enable a critical assessment of the strategies and solutions deployed by these hominins and to isolate important lessons, if only in parable-like fashion, to inform and inspire our own future-making efforts and to place them on a broader empirical and comparative basis.

The data-driven, but also conceptually, politically, and ethically sensitive approach championed by the pEH not only integrates biological variables into the equation (e.g., body plan, locomotion, cognition), but also opens up a new window into the otherwise inaccessible depths of our collective climate change experience prior to the time of “conventional” history focused on kingdoms, states, trade, and warfare. This immensely valuable library of human-climate relations — written, so to say, mostly in stone(tools) and bones — is at our disposable, but has so far made little difference in contemporary climate change debates or the “environmental turn” of the humanities.

Although Paleolithic archaeology and human origins research table an impressive assortment of climate change knowledge, they play virtually no role in the central societal or political debates of our time and part of the reason is that the discipline has missed the opportunity to develop a future-oriented profile. Reading and learning from this library is doubly urgent, however, as climate change is increasingly destroying this library and because it as the knowledge it contains may help us adapt.

The pEH are a creative attempt to re-focus already available intellectual and methodological resources at the interface of Paleolithic archaeology, the paleosciences and the environmental humanities to make a real difference in how we think and act vis-à-vis the drastic climatic and environmental transformations of the near future. We hope this makes a convincing case for the significance of deep-time expertise for human life, society and evolution in the dawning Anthropocene, but also urges archaeological practitioners to become more proactive and intellectually involved with future-oriented discourses and questions across the sciences-humanities interface. After all, archeology is an immensely popular attractor of public attention and museums of culture history appeal to many visitors across the world each year. On par with migration, warfare, and social inequality, climate change and its human impacts must become a central pillar of exhibitions and larger educational programs and the voice of our ancestral past must be heard there more clearly.

In our view, these are some of the first steps towards a fuller and more sensitive integration of archaeological knowledge into today’s pressing climate change debates, but major challenges of the pEH enterprise remain: Incongruent terminologies and approaches dominant in the stakeholder subjects and fields need to be bridged. Scholars are therefore required to open themselves up for other ways of thinking, endorse epistemological and methodological pluralism, work hard on their inherited conceptual baggage and seek out new interdisciplinary alliances

Climate change is a topic too urgent and too critical for anyone to ignore. No single field or subject can provide a fix to its many challenges, but archaeology in the guise of the pEH can make its own timely contribution and develop a potent societal voice.

Felix Riede, professor of climate change archaeology at the Department of Archaeology and Heritage Studies, Aarhus University, Denmark, and PI of the ERC-funded CLIOARCH project investigating the adaptations and resilience of human societies at the end of the Ice Age.

Madhu Bhaskaran: "As an engineer, you will always have to find a solution to problems in the world"
Yang Yang: Challenges and opportunities always go hand-in-hand
Anonymous name change policies for a more inclusive publishing world
How Accurately Can Digital Computers Model Chaos?