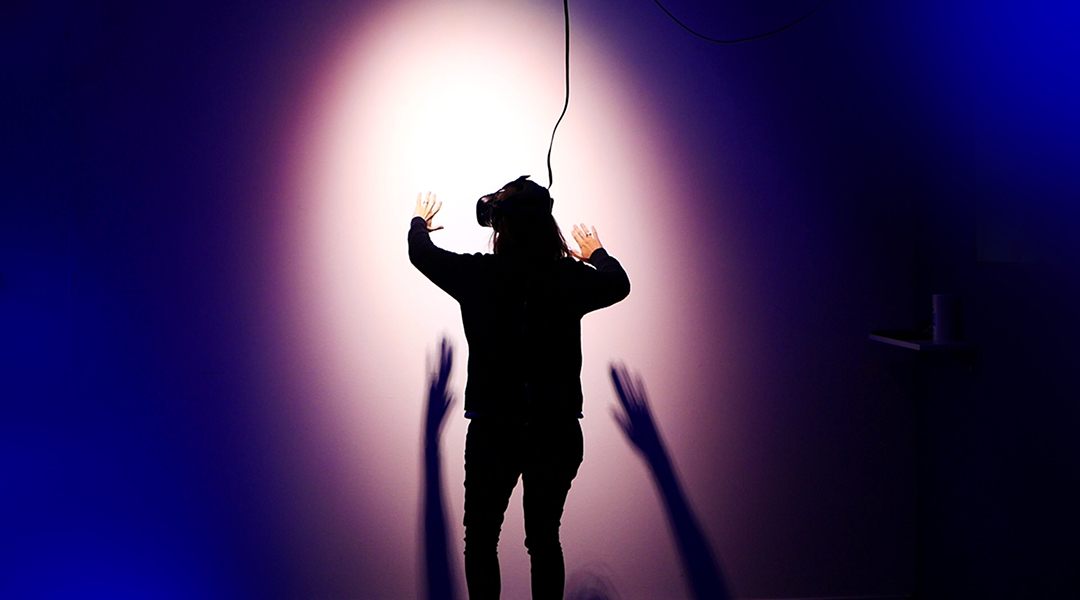 The opening clip of a YouTube compilation video titled “VR Freakouts and Fails” features a player navigating a horror game in a virtual reality headset. As he navigates a pitch-black corridor, his footsteps echo ominously through the space and he struggles to find his in-game flashlight. Within a split second, a humanoid monster flashes across the player’s field of vision, with a cutting sound cue signaling its arrival. The player tenses up and screams in fright, accidentally pausing the game in fear. The scene is spooky, but what made this player have such a visceral reaction?

Virtual reality is incredibly good at fooling the human brain. By strapping on a virtual reality headset, a user transported to a new, immersive world—whether that be an alien planet, the edge of a skyscraper, or even the Civil War. The secret to making these scenarios so believable within a headset is stereopsis—a user’s ability to perceive depth in the environment they are seeing.

When an organism with two eyes that face the same direction gather visual data on an object, it does so from two, slightly different perspectives: the left eye and the right eye. This is called binocular vision. The organism’s brain then stitches these two images together in the visual cortex to generate a sense of depth.

In a digital format, viewing an object on a flat screen such as a computer would not generate a sense of depth since both eyes are looking at the same image. In the case of virtual reality, a headset’s screen is made up of two displays—one for each eye. Each display shows the same object, but that object is viewed by each eye from a marginally different angle. Like in the real world, the difference between what each eye is seeing is perceived by the visual cortex as depth.

Users are also control their perspective within a virtual environment. Virtual reality headsets track a user’s gaze, allowing them to view a virtual world in 360 degrees. Similarly, some virtual reality setups come with wands or controllers where a person can access menus, point to objects, and even draw in this virtual space.

Coupling stereopsis with a user’s ability to interact with the environment they are seeing and the sensory inundation of vision and sound, virtual worlds are only getting more believable. Recent breakthroughs like the Teslasuit and Olfactory Virtual Reality have been able to enhance the virtual reality experience by accessing sense of touch and smell. However, one of the consequences of this immersive technology is its ability to arouse one of the most basic human emotional responses: fear.

Virtual reality can be scary

Researchers from the University of Copenhagen are studying how fear plays a role in users’ emotional responses when using virtual reality. The team of researchers performed a content analysis of 233 YouTube videos of virtual reality gone wrong and found that fear was the most common reason accidents occurred. Users felt fear when objects were rushing toward them or were sensing motion that made them feel out of control. As a result, they exhibited an exaggerated response reaction or attempted to flee the environment, resulting in them hitting walls, furniture, or other people.

“As virtual reality has become cheaper and more common, the technology is being used in a host of environments that weren’t considered during its design,” explains Andreea-Anamaria Muresan, one of the study’s authors from the University of Copenhagen’s Department of Computer Science. “For example, VR is now used in people’s homes, which are often cluttered and populated by people and pets that move around. We’ve taken a closer look at where things go wrong for people so as to optimize user experience.”

A potential cure for fears

Recent research has begun to emerge where virtual reality is being applied as exposure therapy for patients with intense phobias. Work on the topic includes virtual reality as an intervention for those plagued with claustrophobia, fear of flying, and even general anxiety—all with promising results.

A 2021 study published in npj Digital Medicine by scientists from the University of Basel in Switzerland determined how a smartphone-based virtual reality app could potentially help cure fear of heights. Throughout the experiment, participants were exposed to the app’s 360-degree depiction of real-world heights, which were captured by the researchers via drone. In the randomized, single-blind study, the participants that used the app repeatedly saw a clear reduction in avoidance behavior and fear of heights. The authors state that upwards of 5% of the general population suffers from fear of heights, and neglect to take advantage of any treatment options.

Virtual reality is still a relatively novel technology, one that is incredibly effective at generating user immersion. As such, defining the limit between emotional response and emotional treatment is important for designing applications of this technology to maximize its potential.