It reads like the plot of an action movie: against all odds, an unassuming catalyst avoids deactivation and captures its target with record effectiveness.

The conversion of ethylbenzene to styrene is a key reaction in polymer synthesis. With a huge global demand for styrene, the motivation is high to find improved catalysts that can remain stable under the required steam-free, oxygen-free dehydrogenation conditions, as well as being resistant to the leaching of active sites and other deactivation phenomena which can occur. 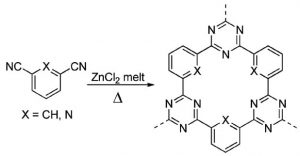 A collaboration working in Italy, Germany, and France has turned to a new class of metal-free catalyst for this industrially important, energy-hungry reaction. Formed through the controlled thermal treatment of dicyanobenzene and dicyanopyridine linkers in a melt of zinc chloride, covalent triazine frameworks (CTFs) are a sort of porous, cross-linked, organic polymer structure which demonstrate significantly better activity and stability under the required conditions than the current benchmark K–Fe.

Surprisingly, when the deactivation of the CTF catalysts was examined, one sample in particular was found to undergo no initial deactivation, apparently avoiding passivation altogether. The researchers suggest that the high accessibility of surface basic sites on this catalyst plays a role in its remarkable stability for this reaction, increasing its selectivity for styrene formation by suppressing the occurence of side-cracking reactions.

This accessible surface basicity also suggests that the structure should have a high affinity for Lewis acids, making it a strong candidate for application in another area of global concern: gas capture and storage. The CTF catalysts were tested for their ability to capture and store both H2 and CO2, and were found to outperform other state-of-the-art porous polymer structures at all tested gas pressures.

What area of catalysis could it be applied to next? Check out the details of this very promising class of catalyst now in Advanced Functional Materials.