Results suggest that treatments targeting the activation of specific receptors may be efficacious in preventing the development or relapse of anorexia nervosa. 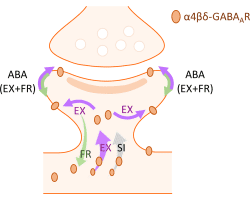 Anorexia nervosa is a debilitating disease characterized by continuously severe, self-imposed starvation and intense comorbid anxiety, which manifests as a fear of gaining weight. Anorexia has a lifetime prevalence of 1-2% worldwide, affects females nine times more than males, and has the highest mortality rate of any mental illness, surpassing depression. Despite the severity of this disease, no accepted pharmacological treatments exist and current treatments, such as benzodiazepines, are not efficacious in treating the disease or preventing relapse.

Recent studies suggest that the expression of α4βδ-GABAA receptors contribute to the regulation of mental disorders, including anxiety, depression, premenstrual dysphoric disorder, and anorexia nervosa. In particular, previous work has shown that in animal models of anorexia nervosa, the expression of α4βδ-GABAA receptors at extrasynaptic locations in the hippocampus increases. 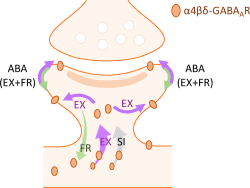 Hypothesized sequence of events leading to the upregulation of α4βδ-GABAARs at synaptic clefts of ABA tissue. More information here.