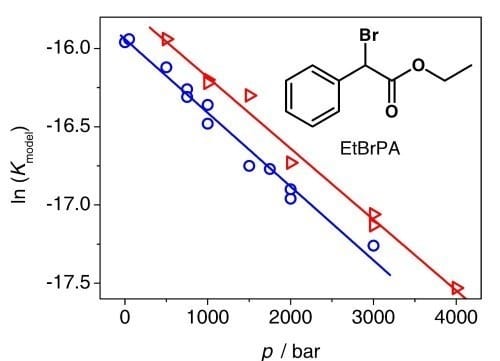 Controlled radical polymerizations such as atom-transfer radical polymerization (ATRP) provides access to polymers with narrow molar mass distribution and precisely tailored architecture and functionality. Radical termination in ATRP is largely reduced by reversible radical activation and deactivation mediated by a metal catalyst. Polymerization rate and dispersity depend on the value of the activation–deactivation equilibrium constant, KATRP, and the kinetics of Cu-catalyzed ATRP has been extensively studied.

As shown by the groups of M. Buback (Göttingen University) and K. Matyjaszewski (Carnegie Mellon University, Pittsburgh), Fe-mediated ATRP may be an alternative due to the broad availability and low potential toxicity. Here KATRP was studied on model systems in the absence of monomer up to 4000 bar via online VIS/NIR spectroscopy monitoring of the FeIII species. The reaction volume was determined to be ΔVR = 13 ± 3 cm3∙mol−1, which indicates that Kmodel decreases with pressure.

This observation points to preferred formation of catalytically inactive iron–solvent complexes towards higher pressure. Since solvents such as N-methylpyrrolidin-2-one (NMP) or acetonitrile may reduce catalyst activity in Fe-catalyzed ATRP, suitable solvent selection is important for the development of efficient iron-based ATRP catalysts.