In many applications, obtaining thicker polymer layers upon surface initiated radical polymerization would be advantageous. Towards this goal a better theoretical understanding of the mechanisms behind chain growth is crucial. 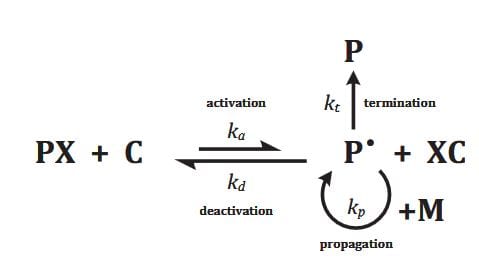 In many applications, obtaining thicker polymer layers from surface initiated radical polymerization would be advantageous. Towards this goal, a better theoretical understanding of the mechanisms behind chain growth is crucial. 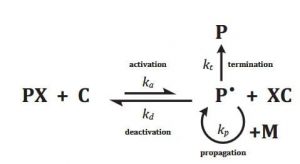 Numerous studies have focused on modifications of surfaces via surface-initiated controlled radical polymerization, such as surface-initiated atom transfer radical polymerization (SI-ATRP). However the theory behind the process is not well understood and many questions remain to be answered. In particular the achievable polymer layer thickness seems to be restricted, although thicker layers are often desired. In practice, at the beginning of SI-ATRP there is a linear increase in thickness, however later on, the growth-rate slows down. What are the mechanisms that stop chains from growing in the presence of abundant monomers? There are two theories, the propagation theory and the termination theory. The first states that a growing crowd of chains reduces the available monomer molecules for radical chain ends, which are inside the polymer layer, thereby reducing the growth rate. The second explains that radical termination reactions lead to a decrease in concentration of active chain ends.

Mastan, L. Xi, and S. Zhu, a group of scientists from the McMaster University in Hamilton (Ontario, Canada) examined the propagation and termination theories with a model-based approach. They focused on SI-ATRP with excess deactivator on a flat surface and compared the model predictions with the reported experimental observations. The effects of grafting density and catalyst concentration on the growth rate of the grafted layer received particular attention. Experimental data showed that an increase in grafting density could lead to both an increase or decrease in chain length growth rate. The propagation model predicted a decrease, because of augmenting crowding, whereas the termination model presented both trends.