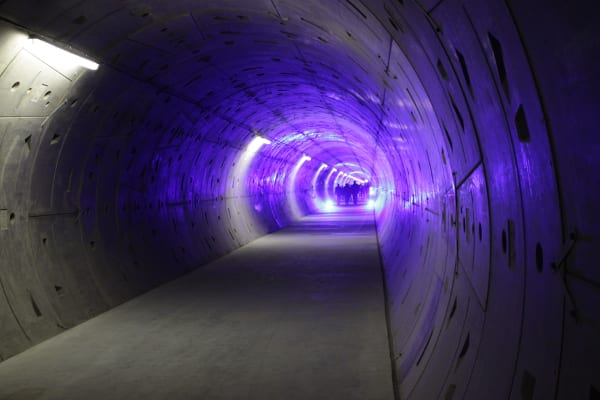 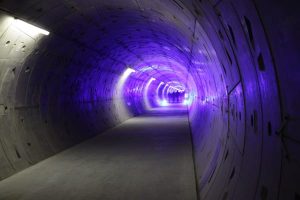 An important milestone has been reached on Germany’s largest science construction site: the underground civil engineering work for the X-ray laser European XFEL has been completed, and the underground construction is almost finished. To mark the occasion, around 300 guests from politics, academia, administration, and business gathered to celebrate and visit the underground facilities in Schenefeld, Schleswig-Holstein.

Starting in 2016, the European XFEL will generate intensive X-ray flashes, allowing scientists to investigate, for example, the atomic structure of biomolecules, pathogens, and numerous new and existing materials, as well as film chemical reactions. The complex will consist of a tunnel system that is approximately 5.8 kilometres long as well as several buildings on the campus of Deutsches Elektronen-Synchrotron (DESY) in Hamburg-Bahrenfeld, at the Osdorfer Born site, and on the main Schenefeld site. The tunnels open into a 4500 square metre underground experiment hall, with dimensions comparable to those of a hockey field. Its depth of 14 metres offers enough space to make a four- to five-storey house disappear completely.

Hamburg’s Senator for Science Dr. Dorothee Stapelfeldt: “Working together with strong partners can make you even more successful: Twelve European countries are participating in the construction and operation of the European XFEL. The German government and the federal states of Schleswig-Holstein and Hamburg contribute more than half of the building costs. With the investments into the European XFEL, the metropolitan region of Hamburg underscores its leading position as an international centre for structural research.”

In her remarks at today’s celebration, Dr. Beatrix Vierkorn-Rudolph, head of the Directorate for Large Facilities and Basic Research of the German Federal Ministry of Education and Research (BMBF) and chair of the European Strategy Forum on Research Infrastructures (ESFRI), said: “The huge dimensions we see here remind us yet again what a truly unique project this is. The underground civil construction was to be completed by May 2013—an ambitious goal. I am very pleased that the underground civil construction of this large-scale international project was concluded on schedule.”

“Twelve European countries have joined forces to jointly build a worldwide-unique research facility. At this point, we have successfully completed underground civil construction, which was probably the most difficult construction phase,” said Massimo Altarelli, managing director of European XFEL. “Now we will concentrate on the construction of the above-ground buildings, the installation of the X-ray laser, and the continuing development of the corresponding scientific instruments and tools.” Altarelli thanked the construction companies and their personnel for their achievements. He also expressed his gratitude to the BMBF, the other 11 partner countries, the federal states of Hamburg and Schleswig-Holstein, the Pinneberg district, and the town of Schenefeld for their support.

DESY, the main shareholder of European XFEL and the building contractor for the underground civil construction work, is currently installing the technical infrastructure. “Europe’s new X-ray laser will provide unprecedented insights into the nanocosm,” said Helmut Dosch, chairman of the DESY Board of Directors. “All those who contributed to the civil engineering works of this large-scale international project can be proud: the DESY building department, which carried out the construction management, as well as the staffs of the participating construction companies, of European XFEL, and of DESY.” Dosch also thanked the neighbours of the construction site for their patience and understanding.

In the past three years, about 3500 construction workers, most of them working for the ARGE Tunnel XFEL consortium, moved more than 500 000 cubic metres of earth and used 150 000 cubic metres of concrete and 28 tons of steel for underground construction. The tunnels, which were completed last year, were excavated with two tunnel boring machines—one 71 metres long, the other 83 metres long—weighing more than 500 tons each. Starting on the DESY campus in Hamburg-Bahrenfeld, the 2 kilometre long accelerator tunnel leads to the Osdorfer Born site. In this tunnel, DESY will build a particle accelerator for the European XFEL that will accelerate electrons to almost the speed of light. Then, the fast particles will be distributed to the so-called photon tunnels, where X-ray light will be produced. To reach this goal, European XFEL scientists will use strong magnets (undulators) to force the electrons to follow a slalom course. In the curves, the particles will emit light flashes. The course will be set in such a way that the light flashes—as in a laser—reinforce each other to an intense pulse.

Five photon tunnels end in the underground experiment hall in Schenefeld, where the X-ray flashes will be guided to up to 15 scientific instruments. The construction of the experiment hall was especially challenging because the ground of the building pit was located far below the ground water level. Divers were needed to build the concrete foundation under water before the water could be pumped from the pit. To prevent the foundation from being lifted like a ship by the ground water, the concrete was anchored in the ground with about 560 steel tie bars up to 22 metres long.

Next year, construction of the main building of the European XFEL will continue on the experiment hall, with three additional storeys of laboratories and offices. At the same time, DESY and European XFEL staff members will install the infrastructure, scientific instruments, and technical equipment. The remaining buildings will be completed in 2015, and the new X-ray laser will start user operation in 2016. Today, the research light sources PETRA III and FLASH at DESY provides biologists, physicians, chemists, physicists, and materials scientists with detailed insights into the molecular and atomic structure of their samples. With the European XFEL, the metropolitan region of Hamburg will be further strengthened as an outstanding centre for the exploration of the nanocosm.

Mussels and chameleons inspire a new type of sensor
Computational electromagnetics: Know your tools for they shape our future
A Kirigami-Based Sensor: When Art and Technology Stand Shoulder to Shoulder
Liquid Metals to Accurately Monitor Human Motion