In a recent Communication in Macromolecular Rapid Communications, a study explores the possibility to control reactions by means of irradiation with specific wavelengths of light.

In a recent Communication in Macromolecular Rapid Communications, a study explores the possibility to control reactions by means of irradiation with specific wavelengths of light.

Control over chemical selectivity is the key to successful reactions. Ideally, selectivity allows chemical reactions to proceed via only one pathway in the absence of any side processes. Reaction conditions are usually varied by changing concentration, solvent, reaction time, catalyst, and temperature. Light-induced reactions, however, offer temporal and spatial control, as well as activation by specific wavelengths (i.e. colors of light). Reactions which are triggered by irradiation with light are usually performed at ambient temperatures, allowing for functionalization of thermally labile molecules. Thus, chemists seek reactions that can be triggered selectively with light of a specific wavelength. 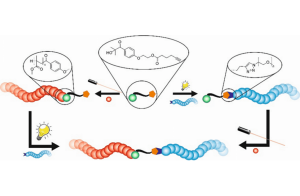 Barner-Kowollik and coworkers, at the Karlsruhe Institute of Technology, introduced a functional molecule that can be employed as initiator for radical polymerizations and can be functionalized via azide-alkyne-cycloaddition without harming any other functional group on the molecule. The important feature is that both reactions are performed λ-orthogonally, i.e. reaction within different parts of the molecule are triggered by a specific wavelength of light. One functionalization reaction was performed with visible light, at 410 nm, and introduced a polyethylene glycol(PEG)-chain to the molecule. The PEGylated species was subsequently used in the free radical polymerization of methyl methacrylate (MMA) under UV irradiation at 350 nm, resulting in a block-type copolymer. Since the reactions of the formation of the block copolymer are λ-orthogonal, the reactions can also take place in reverse order, i.e. the UV induced polymerization followed by the visible light triggered functionalization. Both reaction pathways forgo protecting groups, thereby highlighting the stability of the new dual functional species.

This study elegantly highlights the possibility to use selectively photo-triggered reactions in the preparation of multifunctional polymers. It may further drive new technological progress in the field of polymer science (introducing thermally instable functionalities by means of irradiation, derivatization of UV-sensitive end groups, anchoring onto surfaces and much more).