A tumor prodrug, which is able to monitor drug release and therapeutic success in real time, is developed. 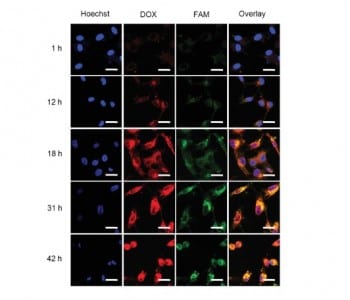 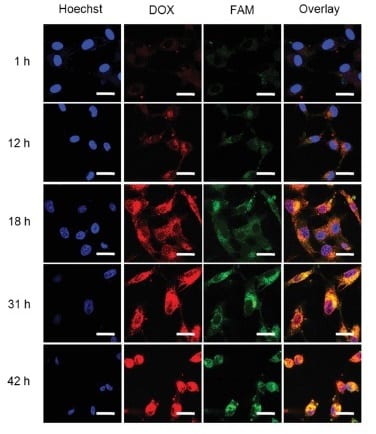 Researchers from Wuhan, China have developed a tumor prodrug, which is able to monitor drug release and therapeutic success in real time. This prodrug combines therapeutic and diagnostic properties and can therefore serve as theranostic agent. Compared to the potent tumor drug doxorubicin (DOX), it shows superior selectivity and cytotoxicity toward cancer cells. Additionally, it is secreted more slowly from the cells, and is thus more effective.

Upon entering the acidic milieu of tumor cells, the prodrug selectively releases DOX. The fluorescence of the drug immediately signalizes drug-release. Subsequently, the DOX-induced cell death releases a second fluorescent molecule, FAM. The fluorescence of FAM occurs at a different wavelength that that of doxorubicin. Its occurrence signalizes cell death and, hence, the efficiency of the drug. In the prodrug, DOX and FAM are attached to a peptide, which recognizes tumor cells and assures selectivity. A quencher, Dabcyl, is also included in the prodrug to assure that no fluorescence can be detected before the fluorescent moieties are released. Quenching occurs via Förster resonance energy transfer (FRET).

The developed thernostic agent allows to monitor DOX efficiency live, which could be used for example to optimize individual doses. Thus, it can be used to develop optimized therapeutic strategies. It is difficult to detect fluorescence signals in patients because of low tissue penetration and background noise of fluorescent biomolecules. However, instruments such as dorsal skin window chambers could help to overcome these difficulties.