Laser coding of PVC film uses high heat during the process, which produces exhaust air containing hydrochloric acid. The environmentally hazardous and unhealthy substance must be removed as soon as possible using suitable cleaning systems. Activated carbon filters are commonly used; however, corrosive substances in the exhaust air soon attack the metallic housing. Humidity in the exhaust air leads to blockage of the activated carbon and must be changed after a short operating time. 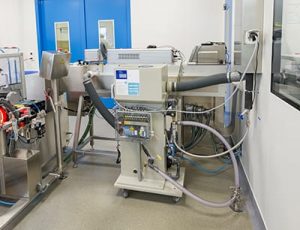 Fridurit is a fume scrubber with a corrosion-resistant filter system. Source: Friatec

As the company Friatec told, its fume scrubber shows a highly efficient and corrosion-resistant filter system. The device uses a cleaning cycle comprising an integrated pump, a polypropylene pall ring package, scrubbing liquid and fan to allow intense washing of hydrochloric acid at source thus providing flexible and quick connection to the ventilation system. The cleaning process uses the counter current method: while hydrochloric exhaust air is drawn upwards, the scrubbing liquid passes in the opposite direction along the pall ring’s surface creating a liquid film that provides a contact surface for the exhaust air. When exhaust air and scrubbing liquid meet, the hydrochloric acid dissolves into the scrubbing liquid thus causing the pollutant to wash out. The cleaned exhaust air leaves the fume scrubber and is then released by a fan into the subsequent ventilation system.

Soft polymers reinforce a new, bioinspired composite
Replacing toxins with water in the green production of plastics
Printable Paper from Plastic Waste
Anyone can control injection molding with an AI helper