A new approach enables rapid characterization of living suspension cells in 4 dimensions while they are immobilized and manipulated within optical traps. 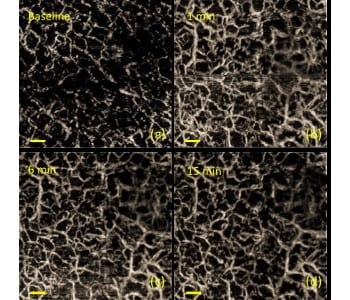 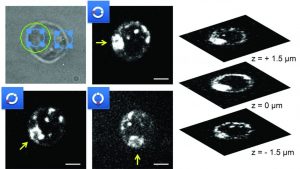 A new approach enables rapid characterization of living suspension cells in 4 dimensions while they are immobilized and manipulated within optical traps.

Optical imaging of highly motile cells or cells in suspension, such as bacterial systems, yeast cells, and immune cells, is a challenging task; indeed, in many cases it is just not possible. The human immunodeficiency virus (HIV), for example, can spread very efficiently from an infected T cell to an uninfected T cell through direct cell-cell contact.

Imaging this process in living cells is very tedious and time-consuming due to the fact that T cells are non-adherent and only a fraction of cells will contain the virus. A method enabling both an active manipulation of the interacting partners and a continuous imaging of the transfer process would open up a way to observe this process (and related ones) at a higher throughput for improved statistics. In addition, other parameters, including the timing of the process and following the specific sequence of events leading up to viral transfer, could be revealed in a better fashion.

Holographic optical tweezers (HOT) are well suited to handle motile cells, and they can greatly increase experimental throughput by trapping an array of cells in a single field of view. That said, researchers struggle with a particular problem when they combine optical tweezers with confocal microscopy: an axial change in the position of the focus typically requires a corresponding axial translocation of the objective lens. This, however, affects both the imaging and trapping planes simultaneously, making it impossible to trap a cell and to determine its 3D morphology at the same time.

An international research team from the University of California (Davis, Sacramento, USA), the University of Ulm (Germany), the University of Gothenburg (Sweden), and the University of Bielefeld (Germany) has now developed a solution to overcome these limitations. They designed an optical system based on a combination of spinning disk confocal fluorescence microscopy and holographic optical tweezers. They utilize a spatial light modulator (SLM) and a voltage-controlled feedback-system to induce a shift in the trapping plane, equal and opposite to the movement of the objective and image plane. In this way, full control over the position and orientation of multiple trapped cells including directed motion and object rotation are possible, while also allowing rapid 4D imaging.
An immediate benefit from this system is the ability to streamline and multiplex imaging experiments. Multiple objects of interest can be pulled and held in a single FOV, instead of imaging only one cell or interaction at a time. Similarly, multiple interactions may be able to be induced and maintained in a single FOV, such as those between a host and pathogen. Furthermore, trapped objects could be rotated to bring specific cellular regions, such as those with a higher (or lower) local concentration of surface receptors, into contact with target areas.

The researchers demonstrated the capabilities of their new setup by imaging and manipulating living, fluorescently stained Jurkat T cells. Structures of cells immobilized within the optical trap could be resolved in a useful z-range of 0.3–30 µm, which covers all non-adherent mammalian cells.