Chemical engineers from Rice University and biophysicists from Georg-August Universität Göttingen in Germany and the VU University Amsterdam in the Netherlands have successfully tracked single molecules inside living cells with carbon nanotubes.

Through this new method, the researchers found that cells stir their interiors using the same motor proteins that serve in muscle contraction. The study, which sheds new light on biological transport mechanisms in cells, appears this week in Science.

The team attached carbon nanotubes to transport molecules known as kinesin motors to visualize and track them as they moved through the cytoplasm of living cells.

“I am amazed how versatile carbon nanotubes are,” said co-author Matteo Pasquali, a Rice professor of chemical and biomolecular engineering and of chemistry. “We use them for a wide range of applications, from engineering conducting fibers to imaging in cells.” 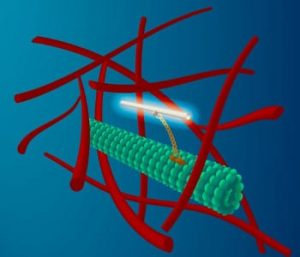 A thin carbon nanotube is attached to a molecular motor (yellow) that moves along microtubule filaments (green) that form the transport network of cells. This transport occurs in the highly crowded environment of the cytoplasm that includes a network of actin filaments (red). The fluorescent nanotube serves as a beacon for both the transport along the microtubule, as well as the buffeting of the microtubule by the highly agitated surrounding cytoplasm. Image: M. Leunissen, Dutch Data Design.

Carbon nanotubes are hollow cylinders of pure carbon with one-atom-thick walls. They naturally fluoresce with near-infrared wavelengths when exposed to visible light, a property discovered at Rice by Professor Rick Smalley a decade ago and then leveraged by Rice Professor Bruce Weisman to image carbon nanotubes. When attached to a molecule, the hitchhiking nanotubes serve as tiny beacons that can be precisely tracked over long periods of time to investigate small, random motions inside cells.

“Any probe that can hitch the length and breadth of the cell, rough it, slum it, struggle against terrible odds, win through and still know where its protein is, is clearly a probe to be reckoned with,” said lead author Nikta Fakhri, paraphrasing “The Hitchhiker’s Guide to the Galaxy.” Fakhri, who earned her Rice doctorate in Pasquali’s lab in 2011, is currently a Human Frontier Science Program Fellow at Göttingen.

“In fact, the exceptional stability of these probes made it possible to observe intracellular motions from times as short as milliseconds to as long as hours,” she said.

For long-distance transport, such as along the long axons of nerve cells, cells usually employ motor proteins tied to lipid vesicles, the cell’s “cargo containers.” This process involves considerable logistics: Cargo needs to be packed, attached to the motors and sent off in the right direction.

“This research has helped uncover an additional, much simpler mechanism for transport within the cell interior,” said principal investigator Christoph Schmidt, a professor of physics at Göttingen. “Cells vigorously stir themselves, much in the way a chemist would accelerate a reaction by shaking a test tube. This will help them to move objects around in the highly crowded cellular environment.”

The researchers showed the same type of motor protein used for muscle contraction is responsible for stirring. They reached this conclusion after exposing the cells to drugs that suppressed these specific motor proteins. The tests showed that the stirring was suppressed as well.

The mechanical cytoskeleton of cells consists of networks of protein filaments, like actin. Within the cell, the motor protein myosin forms bundles that actively contract the actin network for short periods. The researchers found random pinching of the elastic actin network by many myosin bundles resulted in the global internal stirring of the cell. Both actin and myosin play a similar role in muscle contraction.

The highly accurate measurements of internal fluctuations in the cells were explained in a theoretical model developed by VU co-author Fred MacKintosh, who used the elastic properties of the cytoskeleton and the force-generation characteristics of the motors.

“The new discovery not only promotes our understanding of cell dynamics, but also points to interesting possibilities in designing ‘active’ technical materials,” said Fakhri, who will soon join the Massachusetts Institute of Technology faculty as an assistant professor of physics. “Imagine a microscopic biomedical device that mixes tiny samples of blood with reagents to detect disease or smart filters that separate squishy from rigid materials.”