The enhanced emission of Cu nanocrystals/MOF composites is selectively quenched by TNT. 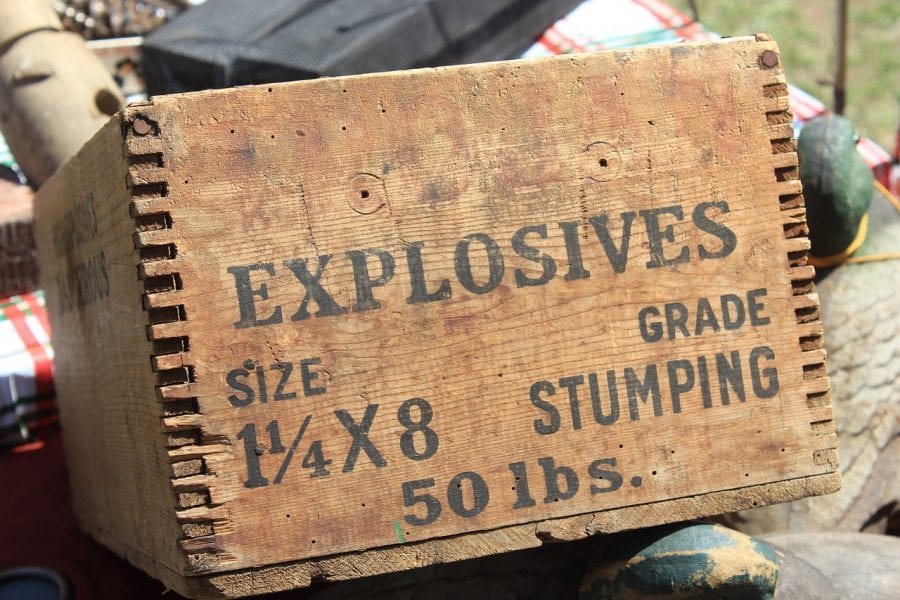 Trinitrotoluene (TNT) is a well-known explosive but is also a hazardous water pollutant. As such, it is vital that trace amounts of this chemical can be detected easily and quickly.

Metal nanoclusters, composed of a few to some hundreds of atoms, have attracted a great deal of attention, as their properties deviate significantly from bulk metals and even nanoparticles, resembling those of molecular compounds. Cu is a relatively abundant, inexpensive metal, which is readily available from commercial sources, and research on Cu nanoclusters is flourishing nowadays. One remarkable property of Cu nanoclusters is their photoluminescence in the visible spectral range. 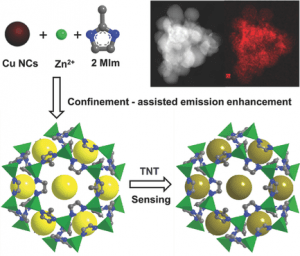 Recent work reported by Andrey L. Rogach and colleagues at the City University of Hong Kong, demonstrates a strategy to improve both the stability and the emission intensity of Cu nanoclusters based on their entrapment into metal-organic frameworks (MOFs). MOFs are porous crystalline materials self-assembled from metal ions/clusters and organic molecules, which have been widely applied in diverse fields such as chemical sensors, optical devices and catalysts, due to their useful features of large specific surface areas, tunable pore size, and ease of synthesis.

The confinement-assisted emission enhancement for Cu nanoclusters embedded in MOFs displayed a 20 times increase, and is similar to the aggregation induced emission (widely reported as AIE) effect of fluorescent species in solution. Cu nanoclusters were distributed homogeneously over the entire MOF structure, which was confirmed by a combination of structural and elemental mapping studies. The team was interested to investigate potential applications of these Cu nanocluster/MOF composites as chemical sensors. They discovered that quite small amounts of TNT could selectively quench the emission of the composite material. TNT concentrations as low as 8.5 μM could be detected using this method.

Making water-splitting for hydrogen storage 50 times more efficient
Becky Smethurst: “My hobby is my job, with a bit of extra stress”
Waste carbon dioxide converted to synthetic fuels
Shirley Meng: "This is materials science, it is the bread and butter of our work"