A Total Eclipse of the Sun: The Response of Photovoltaics in Germany

How the German electrical power grid withstood the the 2015 solar eclipse despite the disruption of energy production from solar power. 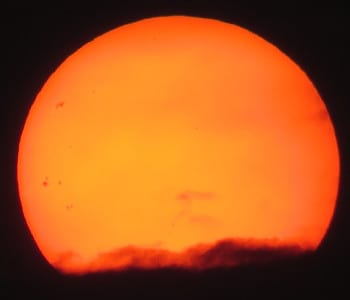 Germany has become one of the leaders in incoporating renewable energy sources through its well-publicized energy transition movement or “Energiewende”. One of the most important challenges to the utilization of renewable energy sources (such as solar power) is to overcome their intermittent nature, so that we can continue to use electricity without interruption, even when the sun is not shining (in the case of photovoltics) and the wind is not blowing (in the case of wind power).

Electrical power providers already work hard to smooth out the power fluctuations and fill in the power gaps to make sure that the electricity supply is always sufficient to meet the demand, but this job becomes tougher as we incorporate more intermittent renewable power sources into the energy mix. Sharp changes in energy production can cause grid instabilitiy or power disruption if other power sources are not able to compensate in real time. As the installed photovoltaic capacity in Germany has increased to 90 Gigawatts today (compared to just 1 Gigawatt during the last solar eclipse in 1999) the 2015 solar eclipse presented the German electrical grid with its biggest challenge up to this point. 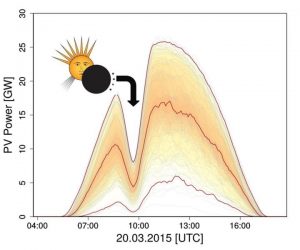 Illustration of the gap in solar energy production caused by the solar eclipse in Germany from March 2015.

According to a study from a team of researchers at the Fraunhofer Institute for Solar Energy Systems (Freiburg, Germany), the German electrical power grid withstood the rapid changes in solar irradiation that resulted from the 2015 solar eclipse despite the disruption of energy production from solar power (photovoltaics). The results are based on a simulation that incorporated collected data from 160 photovoltaic installations throughout Germany, which showed a net change of 17 Gigawatts during the second hour of the eclipse (as illustrated by the dip in the accompanying image).

This would be the equivalent of about 4 billion people switching on their incandescent lamps simultaneously, which is more than enough to act as a stress test of sorts for the German grid, where 80 million people (not to mention the substantial manufacturing capacity) are counting on reliable electrical power. The running capacities of hard coal- and gas-powered plants remained relatively constant during the eclipse, whereas the largest compensation was shown to come from changes in the net import/export of electrical power with the neighboring countries in Europe. The German electrical grid began to decrease its energy exports to several neighbors (as well as to increase imports in a few other cases) as the solar eclipse commenced, and then re-estabilished the normal levels as the eclipse subsided. Accordingly the authors have established the significance of the net import/export interaction with neighboring countries as one of the most important factors for stabilizing the electrical grid with a high contribution from renewable energy technologies.

Thus the high incorporation of renewable energy sources in Germany passes its latest test, which bodes well for the global energy transition going forward, in spite of any celestial interference from the moon.

Quasi-solid zinc metal batteries could power the wearables of tomorrow
Oldest air conditioning system in the world could help meet sustainable development goals
Magnesium Batteries: An Alternative to Lithium?
Where in the world will direct air capture be most effective?