This study expands the potential applications of the SMP foam in tissue engineering. 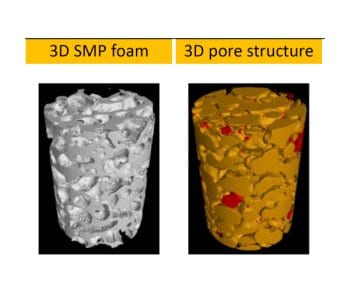 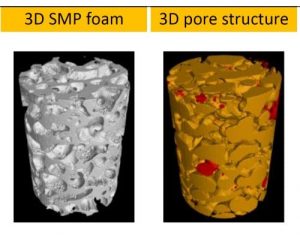 Dynamic biomaterials providing a more in vitro biomimetic context for cells may offer new insights comparing with the traditionally static substrates. However, the applicability of dynamic biomaterials was generally constrained by the assistance of strain device to actuate the shape transition. To facilitate the exploration of cell-topography interactions in vitro, shape memory polymer (SMP) is an alternative approach to fabricate dynamic materials due to its self-actuating in response to external stimulus. SMP is a class of polymeric materials that can be initially formed into a specific primary shape, subsequently reformed into a stable secondary shape and finally recovered to its original shape in response to a specific external stimulus (e.g., temperature, moisture, PH or UV light).

Prof Hu Jinlian’s research group from the institute of textile and clothing, the Hong Kong Polytechnic University and smart polymeric materials research center, Shenzhen base of the Hong Kong Polytechnic University presented a thermo-responsive SMP foam for topographical control of preosteoblast behaviors. They overcame the traditional substrate with static physical structure which is poorly suited to mimic the dynamic nature of the vivo microenvironment. The SMP foam can be programmed to change porous architecture during cell cultivation. The SMP foam can be compressed to a fixed secondary shape with compacted pore structure at 25oC, subsequently recovered to its original shape with approximately round pore structure at 37oC. With the programmable pore architecture, the SMP foam could control the topography of attached cells. The cells preferentially aligned along the pore length direction when seeded on SMP foam with secondary shape, while cells changed their topography in a tangential direction along the pore edge after shape memory actuation at 37oC.

This study expands the potential applications of the SMP foam in tissue engineering such as restricting the penetration of cancer cells into a normal tissue by disturbing the cell alignment and promoting osteoblasts to spread into bone defect region by controlling of cell alignment. This may provide an effective method for studying cell responses to dynamic environment and facilitate the healthy and optimal development of tissue engineering.