Borrowing its shape from a disposable to-go cup lid, this new drone wing adapts to its surroundings all on its own. 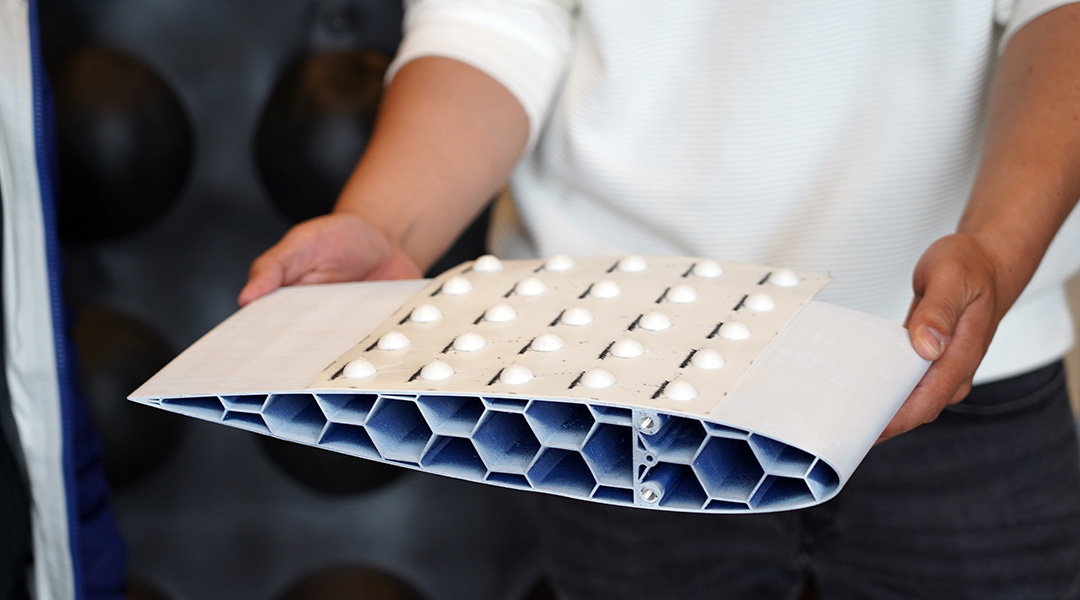 The oddly satisfying small domes that you press on to-go cup lids may one day save a winged drone from a nosedive.

Patterns of these invertible domes on a drone’s wings would give it a way to remember in microseconds what dangerous conditions feel like and react quickly. The study, conducted by researchers at Purdue University and the University of Tennessee, Knoxville, is among the first demonstrations of a metamaterial that uses its shape to learn how to adapt to its surroundings on its own. The paper was published today in the journal Advanced Intelligent Systems.

Unlike humans or other living beings, autonomous vehicles lack ways to filter out information they don’t need, which slows down their response time to changes in their environment.

“There’s this problem called ‘data drowning.’ Drones cannot use their full flight capability because there is just too much data to process from their sensors, which prevents them from flying safely in certain situations,” said Andres Arrieta, a Purdue associate professor of mechanical engineering with a courtesy appointment in aeronautical and astronautical engineering.

Dome-covered surfaces that can sense their surroundings would be a step toward enabling a drone’s wings to feel only the most necessary sensory information. Because it only takes a certain minimum amount of force to invert a dome, forces below this threshold are automatically filtered out.

A specific combination of domes popped up and down at certain parts of the wing could, for example, indicate to the drone’s control system that the wing is experiencing a dangerous pressure pattern. Other dome patterns could signify dangerous temperatures or that an object is approaching, Arrieta said.

It may seem strange that an invertible dome could give memory cues to a drone wing for dangerous conditions, but humans and animals also use unrelated concepts to recognize relationships. This learning strategy is called associative memory. When you have forgotten the name of a place, for example, you might use a detail such as the color of a building to remember it. Recalling a partial version of the memory allows you to construct a much more complete version of the memory.

Arrieta’s lab investigates ways that an engineered material’s shape could help it to compute and process information. His lab frequently takes inspiration from how spiders and other animals use their anatomical shapes to sense and understand the world around them.

For decades, electronics have been designed to save and retrieve images by encoding information in patterns of black or white pixels as 0s or 1s. Because a dome can adopt only two states – popped up or popped down – these states can act like 0s and 1s to create spatial patterns for building associative memory.

Arrieta and his team showed in his study that when a certain level of force inverts a dome, sensors embedded into the flat part of a metamaterial sheet surrounding the dome detect the change in shape. An electrical signal then triggers a memory device called a memristor to make a record of the force and where it was detected on the sheet. With each instance of an inverted dome, the metamaterial learns to remember the pattern that a certain level of force creates on its surface.

In practice, a drone wing would be able to quickly recall a pattern associated with a dangerous condition because the metamaterial keeps a record of all its “partial memories” from inverted dome patterns as a single “complete memory” that these patterns create altogether. Based on this study, the researchers believe that the metamaterial wouldn’t need to “buffer” to recall information that it stores within itself over time.

Since the metamaterial can be manufactured with existing methods, these domes can easily cover a large surface area like the wing of a drone, Arrieta said. Next, the researchers will test how the material responds to its surroundings based on the information it learns from the domes. Arrieta anticipates that it will be possible to build a drone wing using this material design in the next three to five years.

Feature image: Arrays of domes on a drone wing may help it to detect information from its surroundings only when necessary. Credit: Purdue University/Jared Pike