Titania mania – peering into the heart of photocatalysis

4D ultra-fast electron microscopy can peer into and peel away the most subtle details and beauty of photocatalysis, providing a new sharp focus realism of human-made nano machinery for the solar powered fixation of CO2 to fuels and chemical feedstocks. 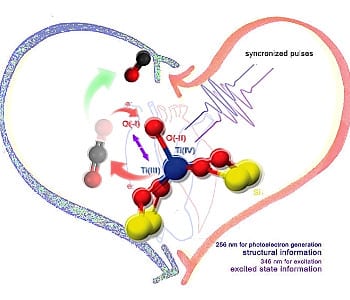 The most photoactive form of titania is the Anatase polymorph of TiO2. Its structure is based upon a three-dimensional interconnected network of six-coordinate TiO6 octahedra. In its intrinsic form it has a wide band gap and only absorbs the ultraviolet wavelength range of the solar spectrum. Visible light absorption can be induced for example by isomorphous replacement at the Ti(IV) site with transition metal dopants like V(V) and Cr(VI) and at the O(-II) site by N(-III), the creation of oxygen vacancies, and dye and plasmonic sensitization.

The high oxidation potential of photogenerated holes makes TiO2 a powerful oxidant for water and organics. This functionality has spawned wide-ranging utility, such as anti-bacterial paints, self-cleaning windows, tiles and cements, and water purification. Photogenerated electrons in TiO2 similarly exhibit a high reduction potential enabling the production of solar fuels, such as H2 from H2O and CH4, CH3OH and CO from CO2.

There are other wide band gap photoactive Ti(IV) based oxides, such as the Rutile and Brookite polymorphs of TiO2, the Perovskite form of strontium titanate SrTiO3, and in the context of this editorial, the nanoporous open-framework titanosilicate, Na4Ti2Si8O22·4H2O.

What distinguishes the titanosilicate from the other mentioned Ti(IV) based oxides is that the Ti(IV) is five-coordinate with a square pyramidal geometry, having one short 1.70 Å axial Ti=O double bond with four longer 1.96Å equatorial Ti-O single bonds, as illustrated in the scheme.

This five-coordinate TiO5 site is photoactive and sterically accessible to molecules with the right size and shape, able to enter the voids of the open-framework titanosilicate. As a result of these properties, nanoporous titanosilicates have enjoyed wide-ranging applications in chemo-, regio-, and shape-selective oxidations of organic compounds.

It is interesting to note that while the photoactivity of the aforementioned titanosilicate has been known for many years, the precise description of the photoexcited state has never been observed directly in real time and has only been conjectured to involve the electronic-structural change
Ti(IV)O(-II) + hν → Ti(III)O(-I). It has been imagined that ultraviolet band gap excitation causes an oxide-like valence band electron to be promoted to a titanium-like conduction band to create initially an electron-hole pair, which then undergoes trapping in formally mid-gap states that are distinct from recombination centres. The structure of these transient states is unknown but has been likened to an oxygen-to-titanium, ligand-to-metal charge-transfer excitation. Based on this idea, one would have speculated the Ti-O bond length in the excited state would be longer than in the ground state.

Now we have a new tool to answer these questions. Recent work using 4D ultrafast diffraction has come to the rescue with a femtosecond resolved dynamical study of the nature of the photoactive TiO5 site in the titanosilicate photocatalyst [1]. We now have new evidence that the electronically induced Ti(IV)O(-II) + hν → Ti(III)O(-I) structural transformation occurs because an analysis of the time-dependent changes in the intensity of 2 Bragg diffraction orders was found to be consistent with a model in which there is an increase in the apical bond length in the excited state of the TiO5 square pyramidal site, by as much as 0.8Å on the sub-picosecond timescale. This relatively large change in bond length by itself is quite unusual, especially given the low excitation and few sites contributing to the signal. It could even be bigger.

This 4D ultra-fast electron diffraction experiment was performed on an electron microscope that employs two synchronized pulses of 259 nm and 346 nm light to respectively produce the photoelectron electron beam for diffraction and generate the photoexcited state of the titanosilicate single crystal. By controlling the time delay between the two laser pulses the spatiotemporal dynamics of excitation and relaxation of the photoactive site could be determined.

This experiment provides a model for the spatiotemporal transformation of the ground state apical Ti(IV)=O(-II) double bond of the TiO5 site to the excited state apical Ti(III)-O(-I) single bond. In this model, the structural change occurs by simple displacement of the titanium and oxygen double bond electrons and atomic positions with respect to one another. There seems to be however, insufficient experimental evidence to directly resolve this structure change as there were only two diffraction orders apparently undergoing significant changes. A more complete sampling of reciprocal space is needed to put this suggested mechanism on firm ground but the picture given is intriguing.

The ramifications of these observations in photocatalysis could be significant. In this archetypal study of an open-framework titanosilica, ultraviolet light is proposed to transform a ground state Ti(IV)O(-II) site into an excited state Ti(III)O(-I) site. The latter is both a highly oxidizing and reducing site and is imagined to play a pivotal role in many light-assisted reactions of titania based catalysts.

Within this proposed model, there is also a time-scale placed on the dynamics of the photoactive state in relation to competing chemical processes, such as reduction of CO2, CO and H2O and physical effects, such as radiative and non-radiative recombination that can ensue following photogeneration of the electron-hole pair.

In the emerging and exciting field of gas-phase, light-assisted heterogeneous catalysis, I envision ultra-fast electron diffraction determination of the spatiotemporal structure and dynamics of the photoactive state, will prove indispensable in the synthesis of nanostructured photocatalytic semiconductors by design rather than by chance. Imagine being able to observe at the atomic level a chemical reaction in real time. This feat has recently been demonstrated with sufficient sampling of reciprocal space for metal to metal electron transfer to invert to real space. This work is the first full atom resolved chemical reaction where the enormous number of atomic motions can be seen by eye to reduce to a few key modes [2]. Catalysis is next.

This new and powerful ultra-fast structural tool will greatly empower materials scientists and engineers racing to discover champion photocatalytic nanostructures that can enable the reduction of CO2 to fuels and chemical feedstocks. To be technologically meaningful and economically sensible, solar powered CO2 fixation will have to function at an efficiency and scale high enough to significantly impact greenhouse gas driven climate change, clean enough to ameliorate environmental pollution, and secure and safe enough to provide a renewable and sustainable energy resource to ensure the future health of humankind (for example, http://solarfuelshub.org/, http://solarfuels.utoronto.ca/, http://www.solar-fuels.org/).

How the capybara could improve biofuels
Magnesium Batteries: An Alternative to Lithium?
A Powerful Lightweight Battery Comes Closer to Reality
Safe potassium-ion batteries for next generation technologies