The BioTexValve demonstrates the potential of bio-inspired textile-reinforcement for the fabrication of functional tissue-engineered heart valves for the aortic position. 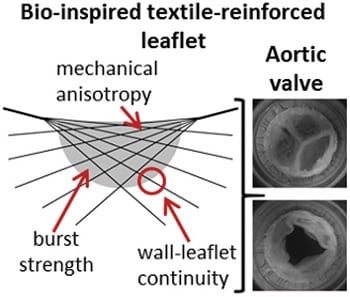 Aortic stenosis is one of the major valvular diseases in Europe and in the USA, requiring approximately 200 000 replacements annually. The conventional therapy is the replacement of the diseased valve with mechanical or biological prostheses which significantly improve the patient’s life quality and expectancy, but still present key limitations. Mechanical prostheses necessitate life-long anticoagulation therapy to avoid thromboembolic complications. Biological prostheses are prone to structural degeneration and therefore to the need of reoperations. Furthermore, these valves are non-viable and thus lack the ability to grow and remodel. 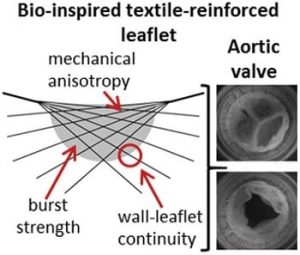 For these reasons, research efforts have focused on engineering living valves with repair and remodelling capabilities, produced with and by the patient’s own cells. However, such tissue-engineered valves are still not strong and stable enough to be implanted in the systemic circulation. Dr. Petra Mela and colleagues addressed this issue by introducing a technical component produced by textile technologies to provide native-like mechanical properties: the BioTexValve. The BioTexValve exploits i) a bio-inspired composite textile scaffold to confer mechanical strength and anisotropy and ii) fibrin as excellent biomaterial for cell adhesion, proliferation and tissue formation. The leaflet textile composite scaffold consists of a thin e-spun layer supporting tailored placed multifilament fibres. The fibres are oriented to bear the mechanical load during the cardiac cycle, mimicking the function of the collagen bundles of the native aortic leaflet, while the e-spun layer increased the overall leaflet’s burst strength. The composite constructs are positioned onto a 3D mould and finally embedded in a fibrin gel containing human vascular cells with an injection moulding process. This results in a complete semilunar heart valve. After 21 days of maturation in a custom-made bioreactor, the valve shows excellent functionality under aortic pressure and flow conditions, as demonstrated by hydrodynamic tests performed according to ISO standards in a mock circulation system. The BioTexValve demonstrates the potential of bio-inspired textile-reinforcement for the fabrication of functional tissue-engineered heart valves for the aortic position.