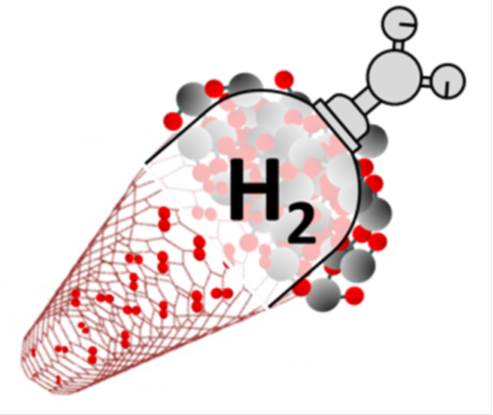 Could carbon nanotubes be the gas tank of the future?  This concept could be closer than we think, according to recent results from Professors Woon-Ming Lau and Ka-Wai Wong and co-workers who achieved hydrogen storage and release inside nanocontainers made from single-walled nanotubes.  The nanotubes were used as tiny high-pressure gas tanks with the ends sealed using plugs made of ice.  A pressure of 5.0 MPa could be stored with no significant leakage and later released by simply heating the tubes to above the ice’s melting temperature.

Efficient and safe hydrogen storage is one of the most significant barriers to the widespread use of hydrogen as a fuel in transportation and other energy sectors.  In the conventional storage of liquid hydrogen the pressurized metal tank accounts for more than 90% of the total weight of the fuel, which more than neutralizes hydrogen’s high energy storage per unit weight.  This is where the nanotubes have a great advantage as they are one of the strongest materials known despite being only 1 atomic layer thick.  According to theoretical calculations, carbon nanotubes in this configuration should be able to withstand 2 GPa of hydrogen pressure before they start to leak.  Even storage at 1 GPa corresponds to a weight storage efficiency of approximately 9 %, close to the 2015 target from the US Department of Energy. If this can be realized, the next generation of hydrogen-powered vehicles may indeed have gas tanks made of carbon nanotubes.