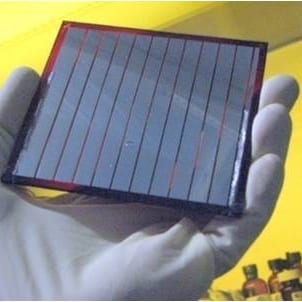 European researchers have developed a simple thermodynamic method to predict whether a substance can resist the high temperatures normally involved in the production of thin films for photovoltaic devices. The new approach could help scientists in their search for better energy materials. Jonathan Scragg of Uppsala University, Sweden, and his colleagues of the University of Bath, UK, and the University of Luxembourg present their results in ChemPhysChem.

“There are many things to consider when looking for the ideal material in a solar cell”, Scragg says. “It must be very effective in converting light into electricity, should not contain any rare, expensive or dangerous raw materials, and must be easy to manufacture with high quality”. However, most of the existing non-silicon inorganic thin-film solar cell technologies are based on either toxic substances, such as cadmium telluride (CdTe), or relatively rare substances, such as copper indium gallium selenide (CIGSe). Many researchers worldwide are therefore searching for alternative materials to overcome these limitations. “We are faced with a huge problem”, Scragg says. “Nature has provided such a large number of different materials that it is impossible to test every single one. We describe a method that can vastly simplify this problem”.

During the manufacturing process, solar cell materials must be heated to high temperatures—in a step called annealing—so that they can crystallize with the required quality. However, many materials cannot tolerate these high temperatures without breaking down, which makes them fundamentally unsuitable. Scragg and co-workers have now found a way to determine beforehand whether a substance will be able to resist the high temperatures encountered in the manufacturing process or not. They predicted the reactions taking place during the thermal treatment of layers of several multinary semiconductor compounds on different substrates and demonstrated that the annealing conditions can be controlled to maximize the stability and quality of the materials.

The scientists studied different substances, such as CIGSe, copper zinc tin selenide (CZTSe), and other less-known ternary and quaternary semiconductors. Scragg believes that the new approach will be of great help in the search for better absorber materials: “There are many alternative materials out there, some of which are very promising and some of which may never meet the demands of the solar cell. Few of these alternatives ever receive the time and resources required to develop them to a high enough level. Instead of focusing on one single material, we take a broader approach, providing a method to determine which materials are potentially useful, and which have fundamental limitations”, he says.