The weather is getting weirder at our poles

New research suggests an increase in lightning strikes and liquid precipitation, which will affect sea level and penguin colonies. 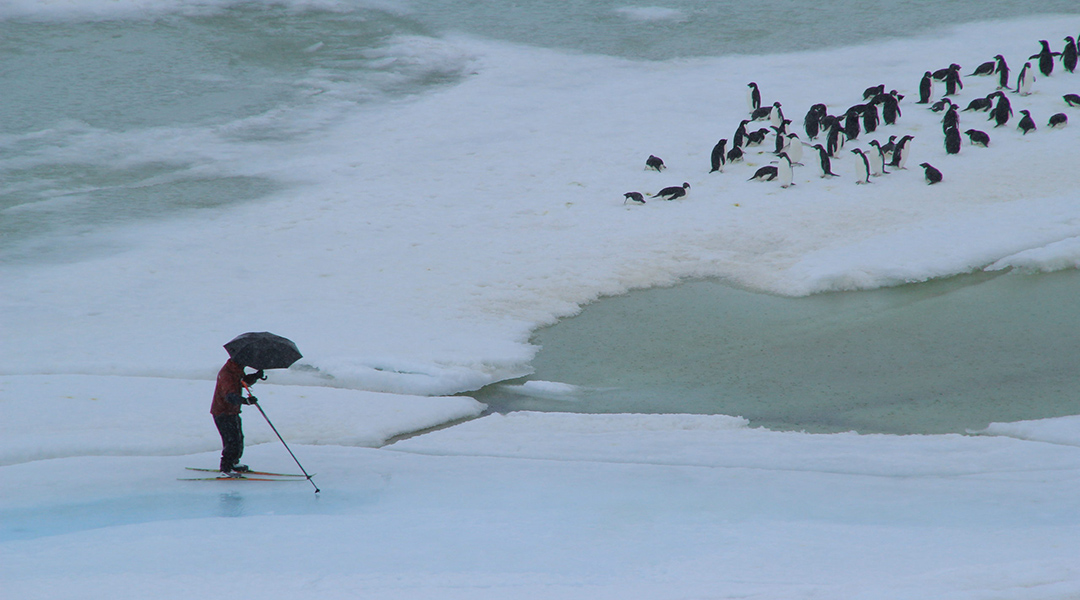 There lie some strange phenomena occurring at our planet’s poles. While they may be expanses of frigid cold and intense snowfall, recent advances in geophysics are insinuating these seemingly dead wastelands may be coming to life — and not in a pleasant way. As the climate continues to warm, evidence suggests increases in liquid precipitation in Antarctica and lightning strikes across the Arctic circle. Two new papers published in Geophysical Research Letters are the forefront of understanding these new weather patterns.

Antarctic rainstorms are increasing in frequency and intensity

Etienne Vignon and colleagues studied visual observations of rain data from ten stations across Antarctica. These stations were chosen due to their consistent archives of meteorological data as well as their geographic distribution: nine were situated along Antarctica’s coastlines, while one was located directly at the South Pole. These data were used to first characterize rainfall behavior across the continent.

While these stations are unable to describe the amount of rain that has fallen, they are able to track the occurrence and character of precipitation events. The researchers searched each station’s meteorologic record for “rainy days,” defined in their manuscript as “any day during which there is at least one report of rain or shower in the past or present synoptic weather reports.” Days of drizzle were found using a similar key.

Overall, a majority of the rainfall Antarctica experiences is along the coast. More specifically, stations along the East Antarctic coast report anywhere from 0 to 22 days per year of liquid precipitation occurring mostly throughout the summer. Meanwhile, on the north-western edge of the Antarctic Peninsula, there are upwards of 50 to 93 rainy days per year. This trend, however, reversed from 2000 to 2015 as the number of rainy days decreased throughout that time.

While this work is one of the first attempts to understanding the behavior of precipitation across Antarctica, the researchers grew curious about the future. As such, they relied on the power of seven simulations within the Coupled Model Intercomparison Project Phase 6 (CMIP6) — a common climate model used within the field of geophysics — in addition to the present and historical data they collected across the ten weather stations. Simulations operated under a high carbon emission scenario and an intermediate carbon emission scenario.

Based on the results obtained from the team’s simulations, all scenarios illustrate an increase frequency and intensity of rainfall events across the continent. In the high emissions scenario, Antarctica will experience an increase in total precipitation between 27 and 70 millimeters per year. More specifically, this scenario illustrated two specific periods of increased precipitation — between 2015 to 2034 and again from 2081 to 2100. In the intermediate emissions scenario, a similar, positive trend in annual average precipitation is observed, but to a lesser degree.

“All and all, that rain will increase in a warming climate should be of no surprise to anyone, but the magnitude at which this occurs on such a cold continent is of interest,” said Richard Bintanja, a climate scientist and professor Groningen University in Netherlands who wasn’t involved with this study, but has studied rainfall in the Arctic.

A Seattle and New Zealand based research team lead by Robert Holzworth obtained data from the World Wide Lightning Location Network (WWLLN). Lightning strikes produce a very narrow burst of energy at 10-15 kHz in the radio wave spectrum. As these waves bounce between the ground and the ionosphere, they can be detected as a lightning strike using incredibly sensitive receivers all over the globe. For their study, the research team used data from the WWLLN’s repository to study lightning strikes from 2010 to 2020.

Holzworth and colleagues first isolated their analysis by latitude, where any lightning strike above 65° North occurred in the Arctic. The team further constrained the data set temporally to June through August for each year since the team identified few lightning strikes in the Arctic outside of the summer months. To ensure authenticity of a lightning strike (as opposed to another burst of radio waves at said frequency), the team only analyzed data points that were detected by six or more WWLLN stations.

The researchers found an upward trend in the amount of lightning strikes in the Arctic across the summer months. To further study this increase in frequency, Holzworth and the team compared their lightning strike data to global temperature change data from the National Oceanographic and Atmospheric Administration.

The larger issue of changing weather

What do these trends mean for the poles? Well for one, rain’s influence in Antarctica can cause a snowball of consequences down the line. “Rainfall can enhance the melting of the snowpack,” explains Vignon. This melt can then create instability and melting in ice sheets across the continent. Also, more intense and common rainstorms may create a more hostile ecosystem for Adelie penguin chicks — their feathers are not yet waterproof and can freeze as they encounter wind and rain.

On the other hand, the Arctic is a massive gateway for shipping vessels. As lightning strikes increase across the North Pole, these shipping vessels face an increase in the risk of getting struck. “With long periods of ice-free ocean and increasing shipping in the Arctic, you’re going to have the same problem you have at lower latitudes: when there’s a lot of people and they don’t know about the lightning threat and it becomes a problem,” said lead author Holzworth.

The studies serve as first attempts to characterize the behavior of unique weather phenomena at the poles. Understanding and monitoring these meteorological changes is crucial for determining how similar behavior in different parts of the world may evolve.

Energy generated in the blink of an eye
Photothermal Fabrics for Solar Desalination
The soft touch of intelligent, robotic systems
Could a human settlement on Mars be sustained with carbon dioxide?