The Secret of Mussel Strength: Materials to Mimic The Mussel Byssus

Researchers investigate formation of polymer networks produced by mixing Fe(III) and polymers, mimicking the reaction that mussels use to bind to rocks. 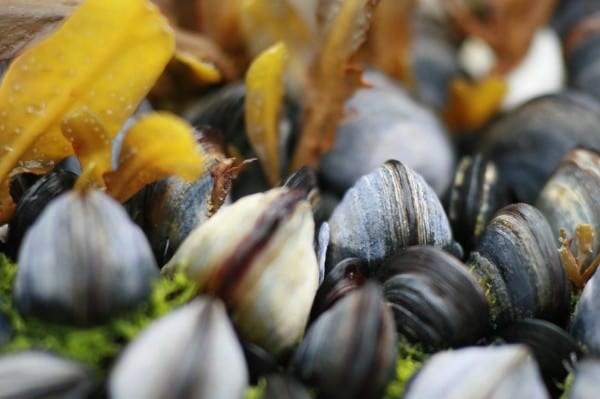 Interest in mussel-inspired materials continues to increase due to the impressive adhesive and mechanical properties of the mussel byssus, the anchor that attaches mussels to surfaces. The byssus is rich in iron as well as DOPA, an amino acid with a catechol side chain that is found in many mussel adhesive proteins. The byssus is formed by secretion of acidic precursor liquids in the alkaline marine environment. Previous studies have shown that coordination interactions between iron and DOPA, favored at high pH, function as mechanical cross-linkers. Hypotheses have suggested that, in addition to participating in coordination, iron may also react with catechols to form covalent cross-links, further contributing to the mechanical performance of the byssus.

In work published in Advanced Functional Materials, researchers at Northwestern University and University of Chicago investigated the formation of model cross-linked polymer networks produced by mixing Fe(III) and catechol polymers, emphasizing the chemical and mechanical consequences of the acidic to alkaline pH change associated with byssal processing. The researchers, led by Phillip Messersmith, uncover new details of iron-catechol interactions and provide the first direct demonstration of Fe(III) catalyzed covalent catechol polymer cross-linking. At acidic pH, mixtures of Fe(III) and catechol polymer formed a covalently cross-linked elastic network.  The mechanical properties of the material became more viscoelastic as the pH increased, reflecting the dynamic nature of Fe(III) -catechol coordination complexes formed at alkaline pH. The coordination bonds dramatically toughen the material, acting as sacrificial bonds that rupture during deformation, and re-forming again upon unloading due to their dynamic nature.

Their findings reveal added complexities of iron-catechol interactions, aid in understanding the role of pH, iron and catechol in mussel byssus processing, and illustrate the wide range of physical properties accessible in synthetic materials through mimicry of mussel protein chemistry and processing.