The Next Generation of Smart Windows Using Carbon Dots

A new nanofluid coating provides an opportunity to reduce energy waste in the next generation of smart windows. 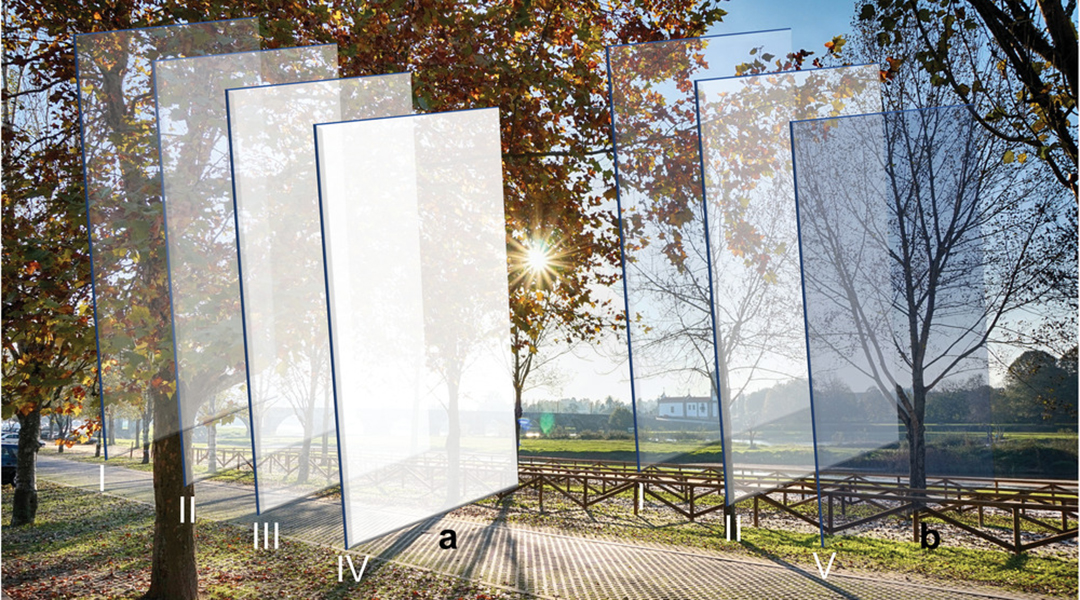 A growing population and increased urbanization are creating enormous energy demands, compromising future targets to mitigate the impending climate crisis. As a result, there is a pressing need to reduce energy consumption and facilitate the transition to green, sustainable energy solutions worldwide.

Prof. Verónica de Zea Bermudez of the University of Trás-os-Montes e Alto Douro—previously featured for earlier work on windows—and her co-workers are back with a recent study which proposes that buildings, which represent the world’s largest energy consuming economic sector, provide a “window of opportunity” for curbing energy waste.

In recent years, smart and switchable glazing has gained increasing interest with one of the hottest topics in the next generation of energy-efficient buildings being the fine control of  light (visible radiation) and heat (near-infrared (NIR) radiation) in the solar spectrum. These two parameters dramatically impact energy reduction, as well as the thermal and visual comfort of the building’s occupants.

However, creating such a versatile, dynamic, and efficient window is no easy feat, and according to the authors, “This effort calls for new designs and synthesis strategies, and for radical new concepts and paradigms of materials science.” 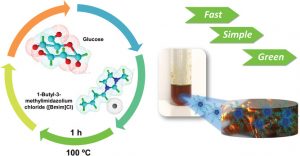 Figure 1. Synthesis of the nanofluid using anhydrous glucose as starting material and 1‐butyl‐3‐methylimidazolium chloride as both reaction medium and functionalization molecule

To tackle this problem, the team has demonstrated an innovative nanotechnology-based platform to create the next generation of low‐cost smart windows for energy efficient buildings. The new technology relies on a non-Newtonian nanofluid based on carbon dots produced from glucose and ionic liquid butylmethylimidazolium chloride ([Bmim]Cl), synthesized by means of a one‐pot hydrothermal method using a mild, non-toxic, single‐step procedure (Fig. 1).

“One of the strong points of this work is that the synthesis of the nanofluid is simple, clean, fast, non-toxic, and cheap”, explains Helena Gonçalves. “Equally interesting is the fact that the material has a series of extremely attractive properties. It is viscous, water-soluble, easy to spread, and reusable. In addition, it has UV-harvesting abilities, which increase with temperature, and thermotropy at 30–40 ºC, a range of temperatures which are common in summer time [in most parts] of the world.”

One of the devices is a passive sun-actuated glass-based thermotropic system, the performance of which can be boosted via the surface plasmon resonance effect (SPRE). This concept is suitable for windows of energy efficient buildings whenever view obstruction is not important.

The second device integrates independent thermotropic and electrochromic options and can be manually operated. If the occupants want privacy and/or low glare, they can allow sunlight to trigger the transmittance reduction when the temperature exceeds around 30 ºC. If the occupants do not want an obstructed view but wish to fine tune the light and heat, then they can simply control the window by means of a switch.

The electrochromic mode offers high visible and NIR transparency when no voltage is applied. Upon applying a low voltage in the range of –2.5 volts, two coloration states are produced: a bright hot mode and a dark cold mode. The electrochromic mode features such as an impressive memory effect that no loss of transmittance was demonstrated under an open circuit more than 1 month after coloration. Even more extraordinary is the unprecedented colossal coloration efficiency values, meaning that the device requires a very low amount of charge to pass from the “off” to “on” states. 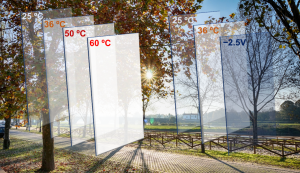 “The whole concept is of high technological relevance because in practice it may be applied immediately at the industrial level and thus have major impact on the building sector”, says Verónica de Zea Bermudez, project leader. “The new synthesis approach we propose is so incredibly simple that virtually any [person] could pick sugar from the kitchen shelf, burn it at 100 ºC, together with benign [Bmim]Cl, and produce this innovative nanofluid. [They] could even fabricate a sun-actuated thermotropic window at home with enhanced performance by just sandwiching the nanofluid between two glass substrates carrying an appropriate coating to induce the plasmonic effect. The same applies to the integrated system. In any case, the devices proposed here allow energy consumption reduction, while offering tremendous indoors versatility and comfort to the user.

“We truly believe our work introduces a radical new materials concept, together with technological novelty of high relevance. The truth is that the applications of [our] nanofluid go beyond the energy applications reported in this work, especially in hot areas, such as space, aeronautics, or even biomedicine. We are just beginning to learn about these quite amazing nanofluids”.