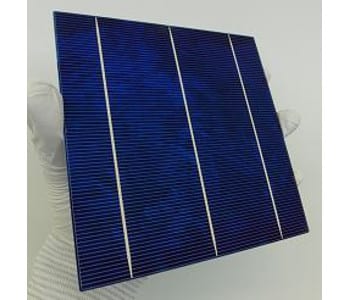 The Fraunhofer Institute for Solar Energy Systems ISE in Freiburg, Germany has developed a new solar cell structure for crystalline silicon. The so-called BOSCO (BOth Sides COllecting and COntacted) structure permits bifacial operation. Due to emitter regions located on both the front and rear side and interconnected by diffused vias, the sunlight absorbed on both faces of a solar cell is converted to electricity. Enabling charge carrier collection on both sides, the bifacial BOSCO structure enables the use of lower quality, less expensive silicon substrates, as compared to conventional monofacial solar cells, without a decrease in energy yield.

Since the BOSCO solar cell has a contact grid on each side, standard module interconnection technology can be used, which lowers the entry barrier into industrial production. Furthermore, the rear contact grid enables bifacial applications by making use of the illumination incident on the rear side of the module for electricity generation.

First experimental results of the BOSCO cell concept on different multicrystalline silicon (mc-Si) materials yield a monofacial efficiency of 17.4 % on large-area wafers from block-cast mc-Si. This value represents a gain of ~0.7 %abs compared to the industry standard (aluminium back-surface field (Al-BSF) solar cells). Furthermore, the significant increase in current generation under bifacial illumination demonstrates that silicon material of low to medium quality is adequate for such applications and evidences the advantage of this technology. (In contrast, most of the known bifacial cell concepts existing to date require high quality, and therefore more costly, wafer substrates.) The results from Fraunhofer ISE indicate that the BOSCO solar cell is a promising candidate for boosting the power of utility-scale photovoltaic plants, even if low-cost wafers of low to medium quality silicon material are used.