A blackboard of therapeutic innovation: Researchers seek to understand how antisense oligonucleotides can "erase" disorders. 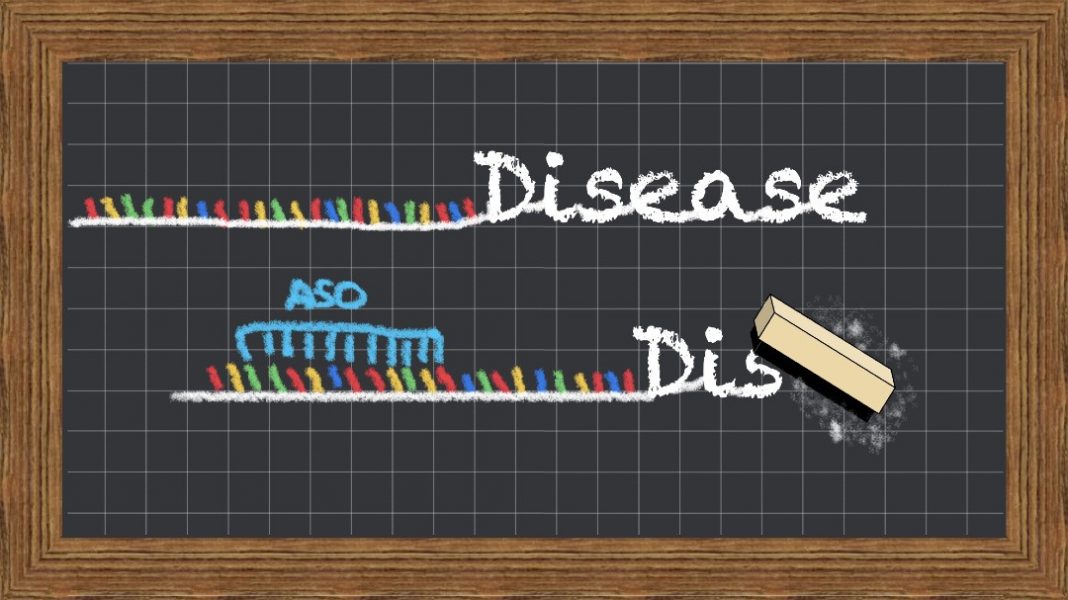 The repertoire of therapeutic options has improved drastically over the past few decades. Some of these options are remarkable, innovative, and at the frontiers of science, such as chimeric antigen receptor (CAR) T-cells for blood cancer.

But despite vast efforts to develop new therapeutics, some diseases remain, at least for now, undruggable. This mainly applies to rare diseases such as genetic disorders, but also to those that are more common and complex, including neurological disorders like Alzheimer’s as well as solid tumors. Another major issue for cancer is the resistance to targeted therapies and relapses, demanding the urgent development of new drugs.

In these contexts where there is a lack of therapeutic options, a new class of therapeutics has emerged: antisense oligonucleotides (ASOs).

ASOs are short sequences of chemically modified oligonucleotides that have the capacity to enter the cellular compartment and bind specifically to RNA transcripts. Sequence complementarity with their target RNA warrants high specificity. The versatility of ASO functioning according to their modality of interaction with their target RNA constitute promising strategies for numerous pathologies.

In a recent article published in WIREs RNA, researchers show the span of possibilities offered by ASOs as a potential solution to this “therapeutic dead-end.” Virtually, ASOs bind specifically to their cognate RNA target and act as an eraser to correct a disorder.

To improve the ASO therapeutic index, key chemical modifications of the ASO backbone/structure have already been made to increase ASO stability, bioavailability, and tissue specificity, and to reduce toxicity. But further optimizations are still needed to raise the therapeutic index even more.

The working principle of ASOs is based on the mechanisms of RNA interference discovered a few years ago. The idea was to recapitulate miRNA-induced mRNA decay. ASOs can be designed to target any mRNA in order to reduce its quantity — in this way, they mimic endogenous miRNA. By using different chemical modifications, it is possible to extend their mode of action to non-degradation activity.

ASOs can thus act as stearic blockers to correct or force splicing, obstruct mRNA degradation by miRNA, or release sequestered protein. The versatility of their mode of action makes ASO a very promising option for many diseases. Numerous molecules are already FDA- and/or EMA-approved and many more are currently being tested in clinical trials.

ASOs are not only a so-called “targeted therapy,” acting only in cells expressing the target RNA. They may constitute one of the most advanced strategies in personalized medicine. The flexibility of their design offers the possibility to target any alteration in a given cell of a single patient.

This flexibility has been demonstrated recently. Milasen, an FDA-approved molecule, was designed for a single young girl with a rare neurological disorder caused by a never-before-seen genetic mutation. This case was a real revolution for drug development and orphan diseases.

ASOs open a new avenue of personalized medicine and could potentially revolutionize practice medicine. The time has come for researchers, clinicians, and companies to use the blackboard approach to design ASOs by hand to cure their favorite disorders.