Systems Biology of Cellular Membranes: a Convergence with Biophysics

Cellular membranes are omnipresent in cells, and are involved in numerous biological functions. Recognizing the intricate relationship between membrane biophysics and cellular processes is a key step towards a systemic understanding of cell biology. 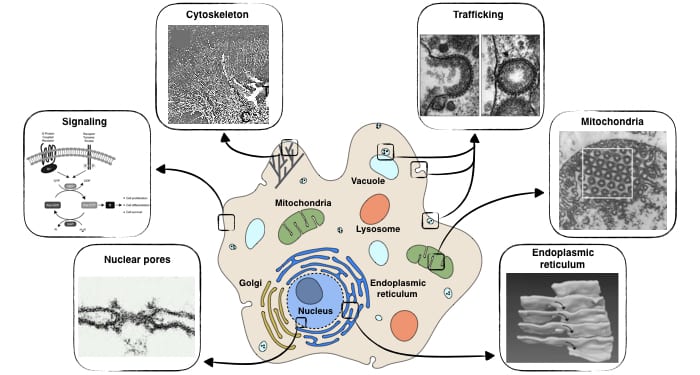 Cells are extremely complex systems, simultaneously undergoing thousands of biological processes to regulate their internal components, interact with their environment, and maintain their cellular functions. Cellular membranes are important key players in all these processes. Consisting of amphipathic molecules known as lipids, cellular membranes separate the inside from the outside of the cell, but also form the envelopes of organelles such as the nucleus, the endoplasmic reticulum, and the mitochondria.

But cellular membranes are much more than just physical barriers; they are home to many proteins and lipids which actively participate in transport and biochemical processes. Most of these biochemical processes are classically studied within the context of systems biology as signaling network maps, where the flow of information is traced from one node to another. On the other hand, cellular membranes structures are often studied from a biophysical perspective, where membrane geometry is regarded in terms of mechanics and energetics.

Until recently, despite their common goal, cell systems biology and membrane biophysics have remained relatively separate fields. In a recent review article in WIREs Systems Biology and Medicine, Chabanon et al. explore the potential convergence of these two approaches, identifying where system biology intersects with biophysics and where these two fields are still far apart. The authors discuss the development of recent experimental, theoretical, and computational methods that have allowed cell biology and biophysics to find common grounds in the systemic study of biological membranes and outline perspectives for the converging future of these two fields.