Experiments with cells and toys reveal fundamentals of synchronized movement in both inanimate objects and living groups. 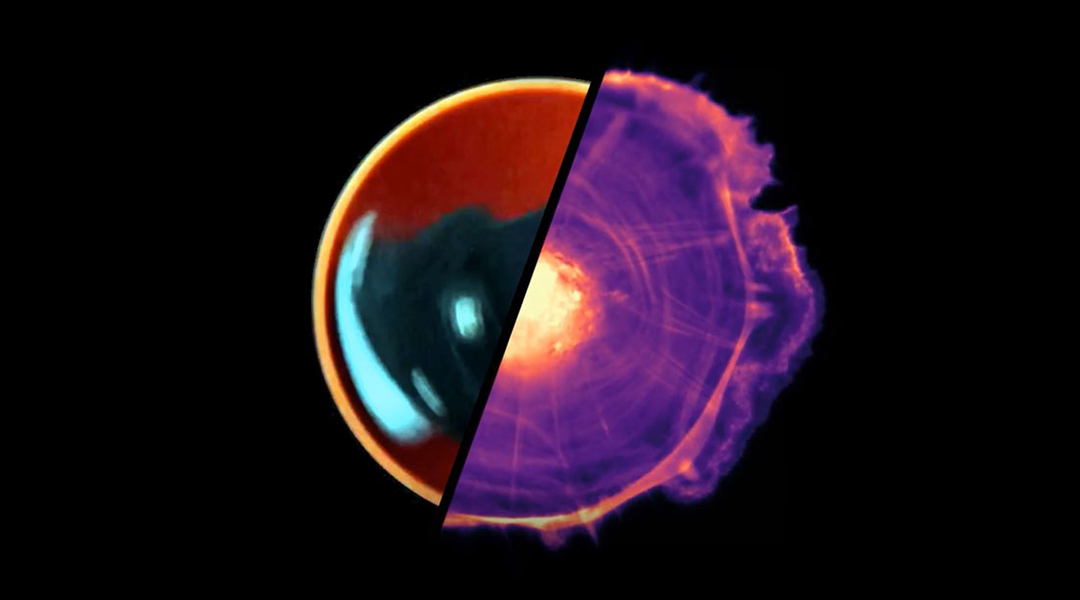 Birds flock in beautiful order, schools of fish glide through the water as one, and thousands of cells squirm in unison throughout our body. This collective motion stems from the coordinated movement of many individuals, with implications ranging from healthy cellular development to crowd control and animal behavior.

However, the details of how the velocity of individuals impact the overall coordinated movement of a group are unclear. A new study published in an online preprint uses an inventive combination of live cell imaging and children’s toys to determine how countless autonomous individuals come together to move with such elegant synchronization.

Michael Riedl, a Ph.D. student from the Institute of Science and Technology in Austria, was entranced by how groups of cells spontaneously transition from chaotic motion to hypnotic rotation when placed in circular fields. Could he untangle some of the key factors governing this coordinated cellular movement?

Factors that might impact cell movement include cell density and the velocity of movement, but changing these intrinsic factors would have likely have significant implications for cell behavior and viability. Instead, he tried seeding cells on fields of different diameters to observe what impact different physical restrictions might have.

He discovered that changing the size of the confinement of a group of cells influences their capacity for synchronization.

“You see that the motion of the cells at smaller confinement sizes becomes a collective, carousel-like rotation,” Riedl explained. Changing the size of the confinement of a group of cells influences their capacity for synchronization. Coordinated rotational movement across the whole group is clearly visible in smaller groups, while in larger masses, transient local vortices form in pockets within the population.

“The cells organize somehow, and it’s not instantaneous. Sometimes they rotate one way, then mess up, and organize again. Why is that?” he asked.

To answer this question, Riedl turned to an unconventional model system.

Deep in the COVID-19 lockdowns, many of us made unusual online purchases. Riedl ordered dozens of weasel balls — small plastic balls with an unbalanced motor that creates seemingly random, jerky movement and a fluffy weasel attached to entertain a cat or a child.

“I waited enthusiastically for the parcel to arrive,” he recalled. When they eventually did come, he removed the weasels and now had a reliable, oscillating model and his experiments began with a handful of balls in a cake tin.

“I stood, holding the cake tin between my feet, and observed the movement from above,” he said. “Before long, [the balls] went into this fast circular motion. I was surprised, because although it’s what I predicted, you never know if it’ll work out in real life.”

Riedl scaled up the experiment (once he’d bought some more balls and batteries) and found similar patterns of order at small and large scales to the cellular movement.

From model to reality

“You could stop there and say you have shown something similar to what happens with cells, but we wanted to go a step further and see if it was really the same phenomenon in our biological model,” said Riedl.

To investigate the parallels between the model system and real movement, the team, which included input from physicists and biologists, visualized motion in cells via waves of actin.

Actin is an abundant protein involved in cell movement, generating force during polymerization as chains increase in size. Waves of polymerization exert force on the cells, much like the motor in the ball, creating movement.

A key aspect of this synchronization is some form of coupling — the ability of individuals to influence each other’s oscillating motion and fall in line. This happened as the balls collided and gradually aligned their motor movement. The oscillation of actin waves creates a similar interaction at the cellular level.

Further experiments determined that the waves of actin were fundamental to cell movement, with low frequency waves leading to lower speed. Interactions between the oscillating patterns were key to the ultimate motion of cells, contributing to the coordinated patterns seen in the first microscope observations.

Riedl describes the work as “curiosity-driven research”, but points out that the basic mechanisms, oscillation-driven movement in a large number of individuals, is ubiquitous.

“The physics is new but it’s applicable to multiple things: think about how flocks develop, or how the velocity of fish is dependent on how fast their tails flap, or birds on how fast they flap their wings,” he said. “Most migration processes are dependent on oscillating processes.

“In biology, you see that the nature of these chemical reactions is not as random as one tends to believe at first. It is a powerful concept to view things like cell migration collectively as not random, but orchestrated on a single cell level and self-organized.”

All videos and images courtesy of Michael Riedl