Researchers from Pennsylvania State University, USA, have now revealed a magnetically transformable surface that can reversibly switch between the lotus and the pitcher plant modes 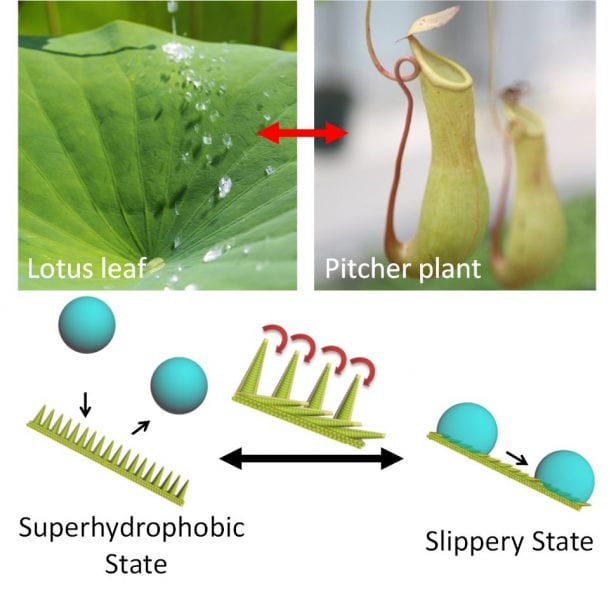 Synthetic liquid‐repellent surfaces are primarily modeled after two classes of biological surfaces. The first are known as superhydrophobic surfaces, which rely on air‐infused solid textures to repel impinging liquid droplets (such as lotus leaves) and the second are called slippery liquid‐infused porous surfaces (SLIPS), which utilize liquid‐infused solid textures to repel immiscible fluids in a manner similar to that of the pitcher plant peristome. Systems that can switch between the two in a controllable manner are very rare.

Tak‐Sing Wong and colleagues from Pennsylvania State University, USA, have now revealed in Advanced Materials  how they have designed a magnetically transformable surface that can reversibly switch between the lotus and the pitcher plant modes. The surface (see the image below) consists of an array of magnetically responsive hierarchical micropillars that are made out of soft polymeric materials and are conformally infused with a liquid lubricant. Their orientations are controlled by the direction of external magnetic field. In the superhydrophobic state, the micropillars are oriented vertically so that a liquid droplet only touches the tips of the hydrophobic micropillars. In the slippery state, the micropillars lay flat against the substrate under an external magnetic field, where an impacting droplet touches a nearly continuous film of lubricant‐infused surface.