Swiss researchers present a postmodification protocol of a polymer that allows the creation of a variety of surfaces for different applications. 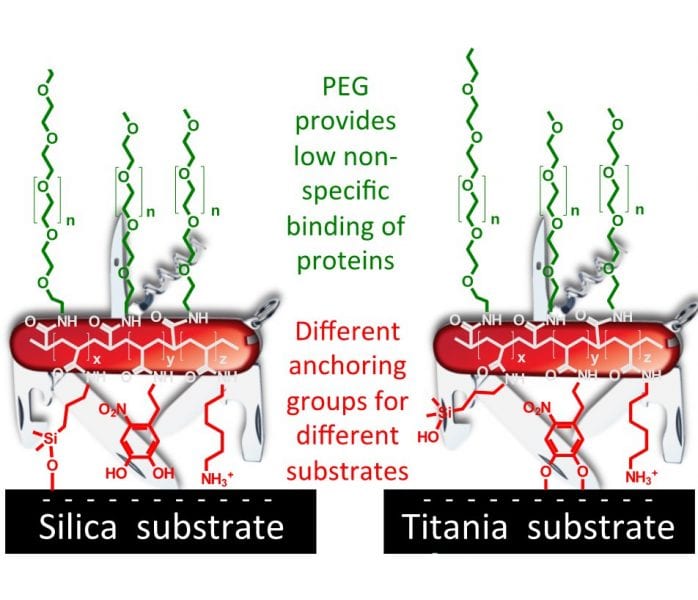 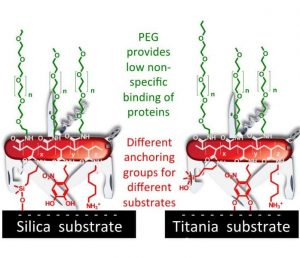 The modification of materials surfaces by attaching molecules with specific properties is an effective way of combining the best bulk properties (e.g. strength, flexibility, conductivity, optical) with the best surface properties (e.g. wettability or biocompatibility) for a specific application.

Preventing the non-specific attachment of proteins to surfaces is often an important design goal, for biosensors, for example, or in the prevention of biofouling, where protein adsorption is often the precursor to attachment of bacteria and higher organisms, such as barnacles. Prevention of protein adsorption is often achieved by attaching polymer chains that are known to be resistant to protein attachment, e.g. poly(ethylene glycol) (PEG). A number of methods has been proposed to do this, but most have been either specific to a particular kind of substrate surface, or have had limited stability in biological media.

In a recent paper Nicholas D. Spencer and co-workers (from the ETH Zürich, Switzerland) have described a new approach that involves a multipurpose polymer design, which the authors liken to a “Swiss Army Knife”. The key element is a polymer backbone (poly(pentafluorophenyl acrylate), (PFPAc)), onto which many different chemical functions have been attached, similarly to the different tools in the knife. These functions can either be involved in binding to a variety of different substrates, or could, for example, have protein-resistant properties, such as those of PEG. In an example they propose, in addition to PEG, functions have been included that bind strongly to silica (silanes) and to titania (catechols), even in the presence of harsh chemical environments that are known to remove molecules that are currently used for similar purposes. The result is a robust surface-modification approach that can be applied to a surface simply by dipping, and provides effective resistance to protein attachment. While this result is useful in itself, the possibilities that the PFPAc approach offers are virtually endless, and it is easy to envision the attachment of a multitude of functional groups (other polymers, fluorescence markers, single-stranded DNA fragments, or antibodies) to a wide variety of surfaces, as current commercial applications developed at SuSoS AG (a spin-off form the ETH) demonstrate.