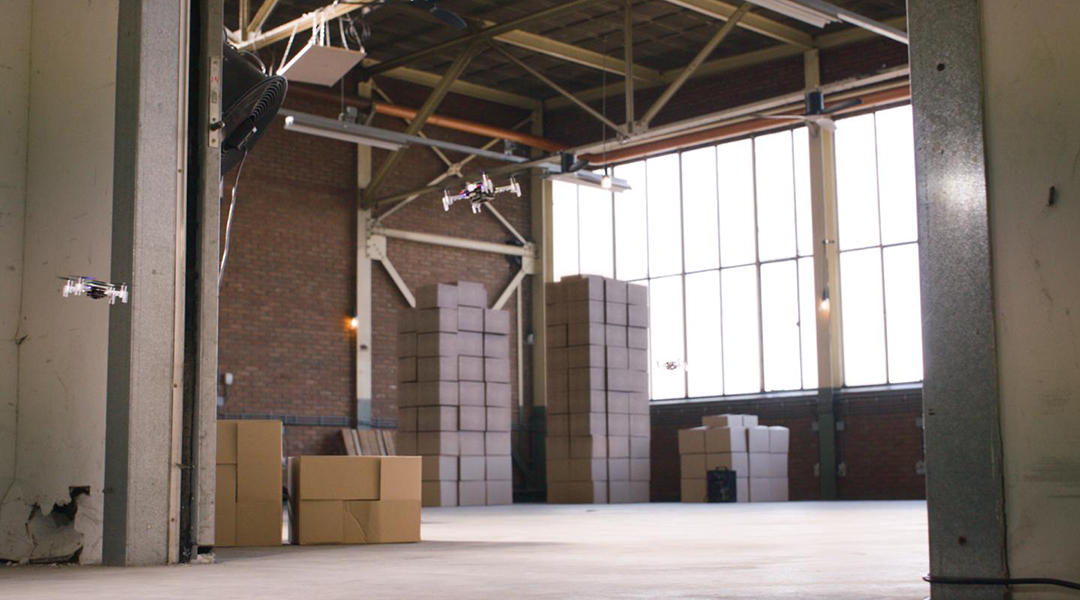 A swarm of tiny drones entering a building in search of a gas leak. Mavlab/TU Delft

When a gas leak in a large building or at an industrial site occurs, firefighters need to go in with gas sensing instruments. However, finding the gas leak may take considerable time, while they are risking their lives. Researchers from TU Delft, the Netherlands, the University of Barcelona, and Harvard University have now developed the first swarm of tiny drones that can autonomously detect and localize gas sources in cluttered indoor environments.

The main challenge the researchers needed to solve was to design the artificial intelligence for this complex task that would fit in the tight computational and memory constraints of the drones. They solved this by means of bio-inspired navigation and search strategies. The article has been published on the ArXiv article server, and it will be presented at the IROS robotics conference later this year.

The work forms an important step in the intelligence of small robots and will allow finding gas leaks more efficiently and without the risk of human lives in real-world environments.

Autonomous gas source localization is a complex task. For one, artificial gas sensors are currently less capable than animal noses in detecting small amounts of gas and staying sensitive to quick changes in gas concentration. Moreover, the environment in which the gas spreads can be complex. Consequently, much of the research in this area has focused on single robots that search for a gas source in rather small, obstacle-free environments in which the source is easier to find.

“We are convinced that swarms of tiny drones are a promising avenue for autonomous gas source localization,” said Guido de Croon, professor at the Micro Air Vehicle laboratory of TU Delft. “The drones’ tiny size makes them very safe to any humans and property still in the building, while their flying capability will allow them to eventually search for the source in three dimensions. Moreover, their small size allows them to fly in narrow indoor areas. Finally, having a swarm of these drones allows them to localize a gas source quicker, while escaping local maxima of gas concentration in order to find the true source.”

However, these properties also make it very hard to instill the drones with the necessary artificial intelligence for autonomous gas source localization. The onboard sensing and processing is extremely limited, excluding the type of AI algorithms that make self-driving cars autonomous. Moreover, operating in a swarm brings its own challenges, since the drones need to be aware of each other for collision avoidance and collaboration.

“Actually, in nature there are ample examples of successful navigation and odor source localization within strict resource constraints,” said Bart Duisterhof, researcher at TU Delft. “Just think of how fruitflies with their tiny brains of ~100,000 neurons infallibly locate the bananas in your kitchen in the summer. They do this by elegantly combining simple behaviors such as flying upwind or orthogonally to the wind depending on whether they sense the odor. Although we could not directly copy these behaviors due to the absence of airflow sensors on our robots, we have instilled our robots with similarly simple behaviors to tackle the task.”

In particular, the tiny drones implement a new “bug” algorithm for their navigation, termed “Sniffy Bug”. As long as no drone has sensed any gas, the drones spread out as much as possible over the environment, while avoiding obstacles and each other. If one of the drones senses gas at its location, it communicates this to the others. From that point on, the drones will collaborate with each other to find the gas source as soon as possible.

The path to real-world applications

“This research shows that swarms of tiny drones can perform very complex tasks,” added Guido, “We hope that this work forms an inspiration for other robotics researchers to rethink the type of AI that is necessary for autonomous flight.”

The development of this type of technology to a fully functioning product still requires further work. For instance, the current work does not yet tackle moving in three dimensions to locate gas sources at a height. Furthermore, the robustness of navigation should also be improved before deploying the drones in a real emergency scenario.

However, the current work is very promising. The developed algorithms are not only useful for detecting gas leaks in buildings, but also for scientific missions such as detecting methane on Mars or economical use such as the early detection of diseases or pests in greenhouses.