The mechanisms for how bacteria break down phosphonates in order to overcome times of phosphate limitation. 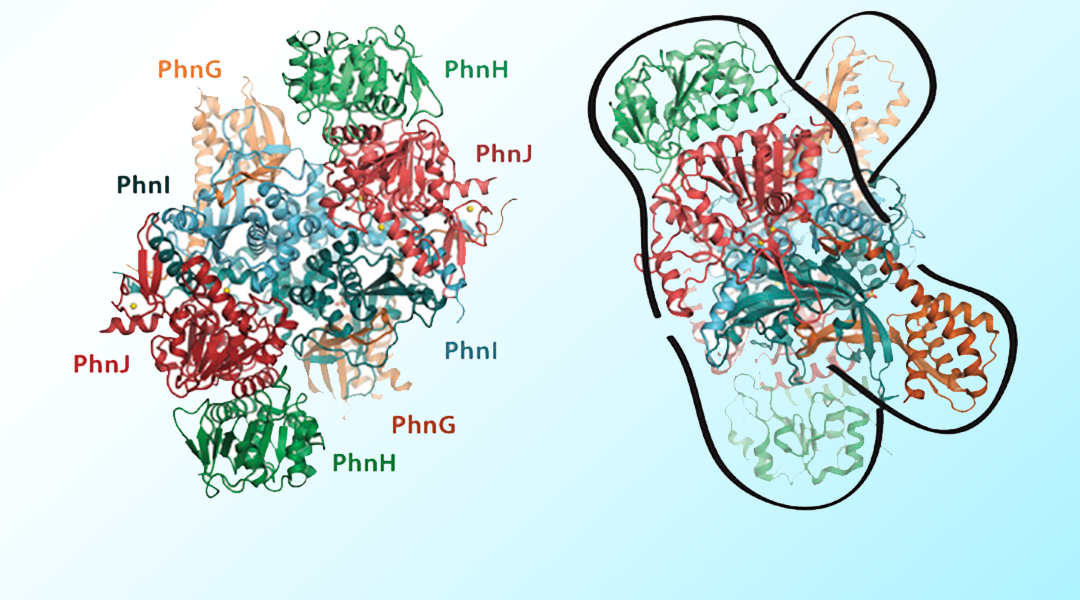 Phosphorus is often a limiting factor for bacterial growth. Most organisms take up this essential macronutrient in the form of inorganic phosphate (Pi). A wide range of bacterial species, however, has also developed a sophisticated enzymatic machinery allowing them to utilize a different source of phosphorus—namely, phosphonate compounds. These organic compounds contain a direct covalent bond between adjacent carbon and phosphorus atoms—the C-P bond—and are ubiquitous in nature. They are not only found as constituents of lipids, polysaccharides, and polypeptides, but also in the form of manmade phosphonates released into the environment, such as detergents and pesticides (e.g., the world’s most use herbicide, glyphosate).

In BioEssays, Ditlev Brodersen and colleagues discuss how bacteria are able to convert phosphonates into phosphate for growth via the C-P lyase pathway.

The C-P lyase pathway requires several multi-protein complexes and, in E. coli, is encoded by the 14-cistron phn operon (see figure below). The structure and function of many of these proteins is already established. PhnJ, for example, a putative member of the radical S-adenosyl methionine (SAM) enzyme family, is responsible for the actual cleavage of the C-P bond. Furthermore, structural studies have revealed that the C-P lyase core complex is a twofold symmetrical dimer of PhnGHIJ heterotetramers. In addition to the enzymes directly involved in the conversion of phosphonates, the phn operon also encodes an ABC transport system responsible for importing phosphonates into the cell. This import system is made up of an ATP-binding cassette (ABC) protein (PhnC), a transmembrane protein (PhnE) and a periplasmic phosphonate-binding protein (PhnD). Interestingly, the phn operon contains two additional putative ABCs (namely PhnK and PhnL).

By taking a look at structural data as well as sequence data, the potential roles for these proteins can be examined. However, it still remains unclear whether they function as part of an ABC transporter complex or whether they have other roles. Additional structural data of the various components and their complexes are still needed—for example, in complex with relevant inhibitors, substrate analogues, stable intermediates and products—to solve the remaining questions surrounding the C-P lyase pathway.

Overview of the E. coli phn operon with indication of known functions of the individual encoded proteins.

Why is potassium the cation of life?
Nobel prize in chemistry 2020: Precision genome editing
Understanding language evolution: Beyond Pan-centrism
Study Reveals Hepatitis A Originated in Insects