Yang Zou and co-workers have found evidence for superconductivity in YFe2Ge2 with an unusual power-law temperature dependence of the electrical resistivity. 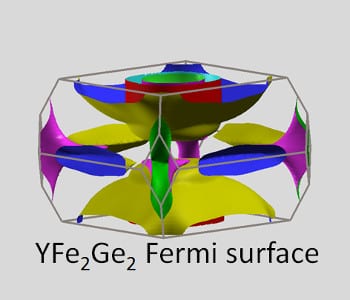 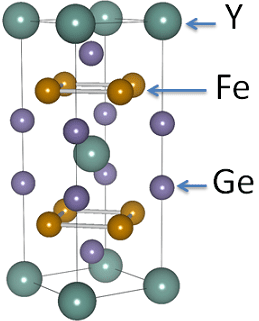 New materials are the lifeblood of condensed matter research. The discovery of high temperature superconductivity in certain iron-pnictide compounds has since 2008 motivated a wide-ranging search for new superconductors. Superconductivity has since been found in numerous iron compounds, in contrast with its more limited occurrence among the cuprates. Iron-based superconductors can be categorised into diverse structure families, such as the ’11-11′ (e.g. SmFeAsO), ‘1-2-2’ (BaFe2As2), ‘1-1-1’ (LiFeP) and ‘1-1’ (FeSe) systems. All these materials have in common that they combine iron with a group-V (pnictogen) or group-VI (chalcogen) element in a layered structure.

This restriction to pnictides or chalcogenides is now being challenged. A team of scientists at the University of Cambridge and at University College London have widened the search to group-IV element Ge and found evidence for superconductivity, albeit at a relatively low temperature. In the ‘1-2-2’ compound YFe2Ge2, they report a superconducting transition below about 1.8 K. They also observed an unusual power-law temperature dependence of the electrical resistivity above 1.8 K, suggesting that the 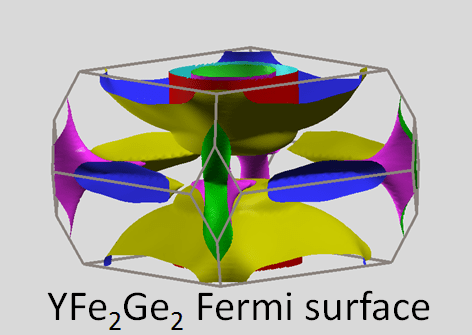 superconductivity develops out of an anomalous normal state. Moreover, the heat capacity in the normal state is unusually high; it is among the highest found in transition metal compounds, and about an order of magnitude higher than what would be expected from numerical calculations, suggesting strong electronic correlations.

Although the nominal Fe valence in YFe2Ge2 is the same as in the isostructural iron-arsenides KFe2As2, RbFe2As2 and CsFe2As2, which have similar superconducting transition temperatures and a similarly enhanced heat capacity as YFe2Ge2, numerical calculations suggest that the electronic structure of YFe2Ge2 is very different to that of these iron-arsenide superconductors. The origin of superconductivity in YFe2Ge2 remains a wide open question, which will require more detailed experimental and theoretical studies and may itself point towards further superconductors, possibly with higher transition temperatures.