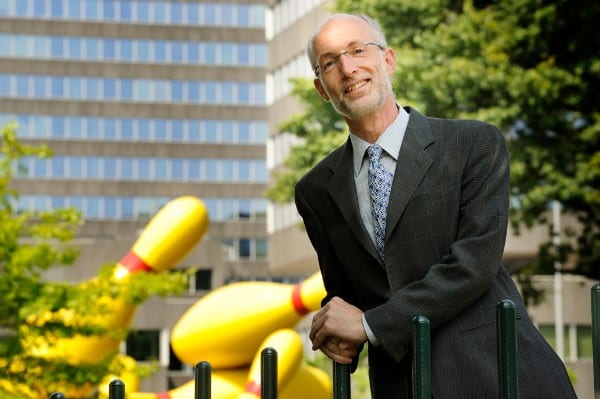 The Materials Research Society will present its highest honor, the Von Hippel Award, to Stuart S.P. Parkin, IBM Fellow, Manager of the Magnetoelectronics Group, and Director of the IBM-Stanford Spintronic Science and Applications Center (SpinAps) at IBM Almaden Research Center. The Von Hippel Award is given annually to an individual in recognition of outstanding contributions to interdisciplinary research on materials. Parkin is being recognized “for pioneering contributions to the science and technology of spintronic materials, particularly in establishing the fundamental foundations of spin-engineered magnetic heterostructures and demonstrating artificial atomically-layered magnetic multilayers for applications in field sensing, magnetic memory and data storage devices.”

Parkin will accept the honor during the awards ceremony of the 2012 MRS Fall Meeting in Boston on Wednesday, November 28 at 6:30 p.m. in the Grand Ballroom of the Sheraton Boston Hotel. There, he will also present his award lecture, The Spin on Electronics!

The Von Hippel Award includes a $10,000 cash prize, honorary membership in MRS and a unique trophy—a mounted ruby laser crystal, symbolizing the many-faceted nature of materials research. The award recognizes those qualities most prized by materials scientists and engineers—brilliance and originality of intellect combined with vision that transcends the boundaries of conventional scientific disciplines, as exemplified by the life of Arthur von Hippel.

Parkin has vastly impacted the research field of spintronics. After the initial discovery of the giant magneto resistance (GMR) effect in 1988, Parkin opened the door for applications of GMR. He demonstrated that oscillatory interlayer coupling is a universal property of nearly all transition and noble metal-based multilayers, thus developing a method of designing specific materials with special properties—here the GMR effect—based on their superstructure. His systematic investigation of a large number of elemental combinations enabled Parkin to find the unique combination of ferromagnetic and nonmagnetic metals that gives rise to a very large magneto resistance effect at room temperature. These designed “nanoengineered devices” with sophisticated properties, together with the development of a rapid and versatile sputtering method for thin-film structure exploration rendered the application of the GMR effect possible.

Parkin’s research interests include oxide thin-film heterostructures, high-temperature superconductors, and magnetic thin-film structures and spintronic materials and devices for advanced sensor, memory, and logic applications. Parkin’s discoveries in magneto-resistive thin-film structures enabled a 1000-fold increase in the storage capacity of magnetic disk drives. Most recently, Parkin is working on a novel storage class memory device, racetrack memory, a radically new storage-memory technology using spin currents to directly manipulate the magnetic state of nanoscale magnetic regions—magnetic domain walls—within magnetic nanowires. This concept is based on the storage of information in three-dimensional arrays of magnetic nanowires, using current-induced displacement of the domain walls along the nanowires. This device aims to match the massive storage capacity of hard disks but with the advantage of a purely electronic operation. A two-dimensional version of the device could also compete with flash memory. The racetrack memory concept was selected as one of the MIT Technology Review’s 2009 list of “10 emerging technologies that can change the way we live.”

Parkin received his BA and PhD degrees from the University of Cambridge and joined IBM as a postdoctoral fellow in 1982, becoming a permanent member of the staff the following year. In 1999, he was named an IBM Fellow, IBM’s highest technical honor. Parkin is also a Fellow of the Materials Research Society, the Royal Society, the American Physical Society, the Institute of Physics (London), the Institute of Electrical and Electronics Engineers, the American Association for the Advancement of Science and the American Academy of Arts and Sciences. He is also a Member of the National Academy of Science and the National Academy of Engineering. In 2012, Parkin was elected an Honorary Fellow of the Indian Academy of Sciences. His honors include the inaugural MRS Outstanding Young Investigator Award in 1991, a Humboldt Research Award, the American Institute of Physics Prize for Industrial Applications of Physics, the European Physical Society’s Hewlett-Packard Europhysics Prize, the American Physical Society’s International New Materials Prize, the IUPAP Magnetism Prize and Neel Medal and the Charles Vernon Boys Prize from the Institute of Physics, London. In 2001, he was named R&D Magazine’s first Innovator of the Year. Parkin has authored ~400 papers and has ~93 issued patents.