A transparent and stretchable electrode could open the new way for flexible displays, solar cells, and electronic devices fitted on a curvature substrate. 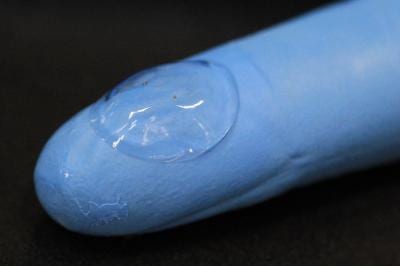 This is an LED-fitted soft eye contact lens. Image: UNIST.

A hybrid transparent and stretchable electrode, developed by a UNIST (Ulsan National Institute of Science and Technology) research team, could open the new way for flexible displays, solar cells, and even electronic devices fitted on a curvature substrate such as soft eye contact lenses.

Transparent electrodes are in and of themselves nothing all that new – they have been widely used in things like touch screens, flat-screen TVs, solar cells and light-emitting devices. Currently transparent electrodes are commonly made from a material known as indium tin oxide (ITO). Although it suffices for its job, it’s brittle, cracking and losing functionality if flexed. It also degrades over time, and is somewhat expensive due to the limited quantities of indium metal.

However, the number of disadvantage of the mNW networks has limited their integration into commercial devices. They have low breakdown voltage, typically high NW-NW junction resistance, high contact resistance between network and active materials, material instability and poor adhesion to plastic substrates.

Graphene is also well known as good a candidate for transparent electrode because of their unique electrical properties and high mechanical flexibility. However, scalable graphene synthesis methods for commercialization produces lower quality graphene with individual segments called grains which increases the electrical resistance at boundaries between these grains.

Silver nanowires, on the other hand, have high resistance because they are randomly oriented like a jumble of toothpicks facing in different directions. In this random orientation, there are many contact between nanowires, resulting in high resistance due to large junction resistance of nanowires. Due to these drawbacks, neither is good for conducting electricity, but a hybrid structure, combined from two materials, is.

The graphene-mNW hybrid structure developed by the research team, as a new class of such electrodes, may soon find use in a variety of other applications. The research team demonstrated Inorganic light-emitting diode (ILDED) devices fitted on a soft eye contact lens using the transparent, stretchable interconnects of the hybrid electrodes as an application example.

As an in vivo study, this contact lens was worn by a live rabbit eye for five hours and none of abnormal behavior, such as bloodshot eye or the rubbing of eye areas, of the live rabbit had been observed.

Wearing eye contact lenses, picture-taking and scanning, is not a scene on Sci-Fi movie anymore.

Jang-Ung Park, professor of the School of Nano-Bioscience and Chemical Engineering, UNIST, led the effort.

“We believe the hybridization between two-dimensional and one-dimensional nanomaterials presents a promising strategy toward flexible, wearable electronics and implantable biosensor devices, and indicate the substantial promise of future electronics,” said Prof. Park.