German researchers found stress to be a new trigger for shape memory polymers. 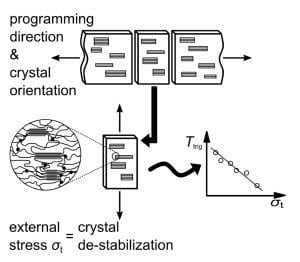 Shape memory polymers (SMP) are smart materials that, after deformation, are able to return to their original shape. This transformation can be triggered by external stimuli – in most cases temperature, but also infrared light, UV light, compression, or alternating magnetic and electric fields.
Rubbers with a cross-linking density above 1% eventually return to their original state at room temperature as the stabilizing crystals vanish. In lightly cross-linked (0,4%) natural rubber strain-induced crystals do not vanish after releasing the stretching force but stabilize the network in a highly elongated state of up to 1000% at room temperature.

The group of Joerg Tiller (University of Dortmund) have now investigated the influence of mechanical stress applied perpendicular to the elongation direction of the network on the stability of these crystals. They found that the material recovers its original shape at a critical transverse stress. It could be shown that this is due to a disruption of the strain-stabilizing crystals, which represents a completely new trigger for SMPs. The variation of transverse stress allows tuning of the trigger temperature Ttrig(σ) in a range of 45 °C to 0 °C. Interestingly, the stress sensitivity ΔTtrig/Δσt strongly depends on the programming procedure. This is the first example of manipulating the transition of a crystal-stabilized SMP after programming. Further, the material might be used as a force actuator in stress sensing and overload protection due to a critical trigger stress σtrig. Moreover, the application of different programming temperatures and transverse stresses allows two-dimensional tuning of the trigger temperature and makes this shape memory polymer unique. Natural rubber samples tuned to a higher average trigger temperature are more sensitive to transverse stress than those tuned to a lower trigger temperature.

This discovery is of fundamental importance and an important contribution to the rapidly evolving field of shape memory polymers.