Strain as a Key to Applied Antiferromagnetic Spintronics

A new approach was presented to employ external mechanical strain for changing the domain distribution in Mn2Au. 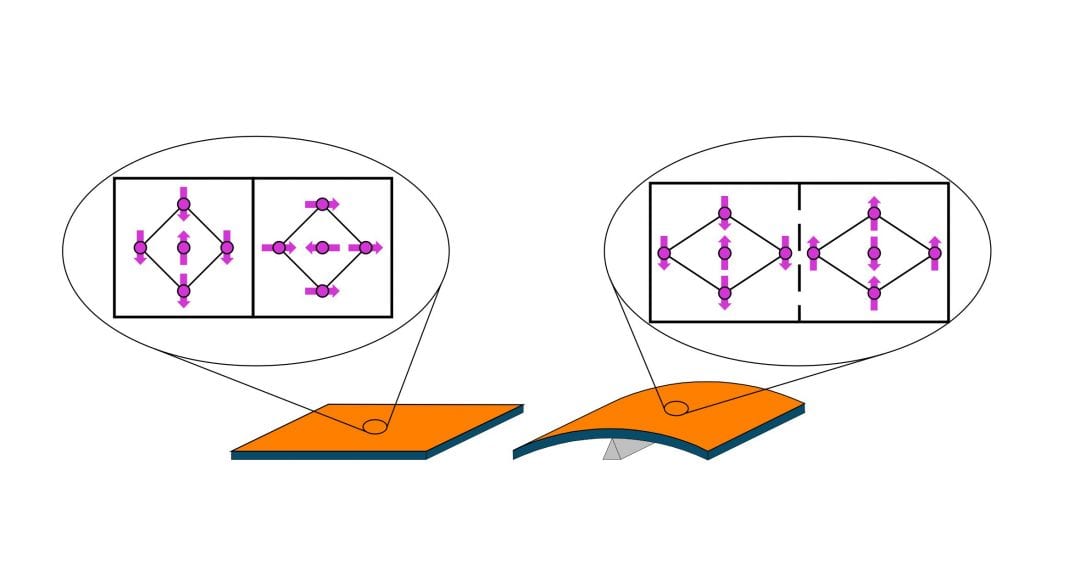 Traditionally, spintronics utilizes switching of ferromagnetic nanolayers by external fields or spin polarized currents. A new type of spintronics based on antiferromagnets promises a much higher operational frequency (THz instead of GHz) and a greater functional element density (no stray field sensibility). To reach this goal, it is necessary to control the size and orientation of antiferromagnetic domains and to introduce new means of switching, different from the contemporary spintronics approaches. 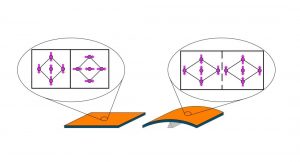 In a magnetic material, not all directions of the magnetic moments are energetically equal. There are favorable directions, so called easy axes, along which the magnetic energy density has minima. In a metallic antiferromagnetic compound Mn2Au, for example, there are two such easy axes. This leads to the formation of two equivalent antiferromagnetic domains in the film plane and the population probability for each of them is equal. Taking into account a small domain size and a high Néel temperature of the material, the task of manipulating its antiferromagnetic order appears to be very challenging if not unsolvable. Mechanical strain is considered to play a vital role in the formation of antiferromagnetic domains because of the lack of magnetic stray fields.

In a recent‚ Antiferromagnetic Spintronics’ special issue of pss RRL a new approach was presented by Sapozhnik et al. to employ external mechanical strain for changing the domain distribution in Mn2Au. This approach has proven to be highly effective. Strain changes the crystal symmetry of the material, thus two crystallographic directions become inequivalent, and only one of them remains as the easy axis at an adequately high strain. At intermediate strain values, the initiated domain wall motion wipes out one type of the domains, thus changing their distribution. However, total reorientation of the staggered magnetization does not take place.

The authors examined the possibility of switching the antiferromagnetic domains by elastic strain and confirmed by synchrotron radiation spectroscopy that this is indeed possible. Nevertheless, room for improving the switching efficiency still remains. The research team hopes that the work will trigger further studies of elasticity induced effects in antiferromagnets that lead to technological applications in the rapidly developing field of spintronics.

The text is kindly provided by Alexey Sapozhnik.