How sterile workers still manage to pass on “their” genes and evolve!

In their hypothesis article in BioEssays, Downing et al. present a testable hypothesis as to why sterile worker castes evolve, and continue to evolve, in many social insect orders: a hypothesis with implications for understanding longevity in general. 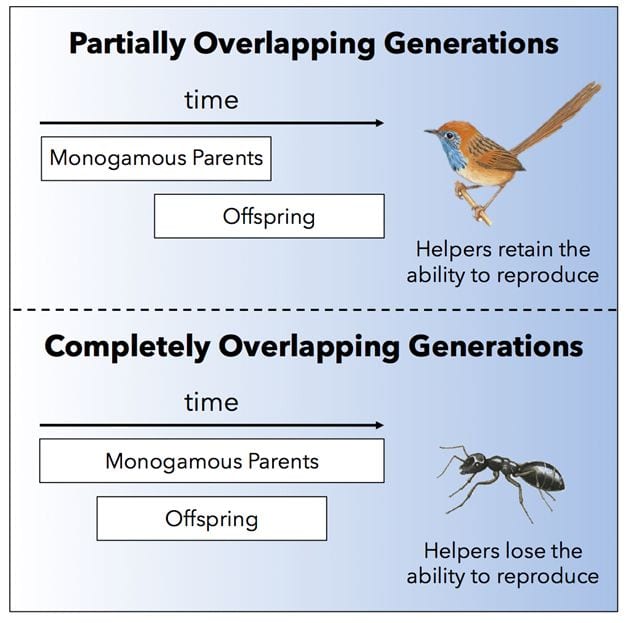 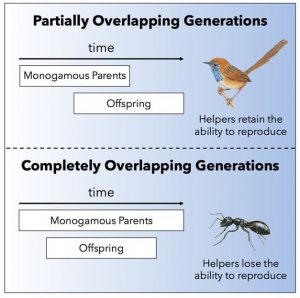 Darwin had a real problem with this one! Though he could understand how worker sterility as a trait could arise, he was certainly perplexed by the question of how it could continue to evolve, given that workers cannot be selected for as individuals, and hence their traits as workers also can’t.

However, if they are  1. intimately (physically) in contact with individuals that benefit from their qualities as workers; 2. the beneficiaries are genetically as similar as possible – that is they result from a single queen insect that has mated with only one male (monogamy); and 3. the reproductive individuals overlap completely in generations with the workers themselves, we have – essentially – a very good proxy for selection of worker genes: the so-called “extended phenotype” of the sterile worker is the survival fitness of the queen-derived offspring that they care for: individuals that carry – to a first approximation – the same DNA as the worker itself.

By contrast, animal species that break the complete overlap between generations cannot manifest the evolutionarily stable structure of a society supported by workers: birds, for example, the parents of which are on average always outlived by their offspring, are never expected to operate such a system.

Basically, the life-span of the breeder has to be longer than that of the helper, and that is, indeed, seen in all social insect communities that have worker individuals. Monogamy is also clearly very important: if a worker doesn’t help exclusively its own genes into future generations, it no longer has an exact proxy for the fitness of its own genome.

To test the strength of this model, what better than to cross a massive divide of the phylogenetic tree of life on earth: Ansell’s naked mole rat Fukomys anselli also has sterile workers, is monogamous and manifests a generational structure in which breeders outlive workers (thus providing complete overlap between worker/offspring generations). In testing these predictions, Downing et al. naturally take us into the realm of long-lived species, and the speculation of whether such research could help us better understand and extend longevity in humans…

Hall of Fame Highlights: Michael J. Sailor
A logic circuit made from DNA
The paradox of dormancy: Why sleep when you can eat?
Yanglong Hou: A Leader in Multidisciplinary Research