Stealthy microrobots that can evade the immune system 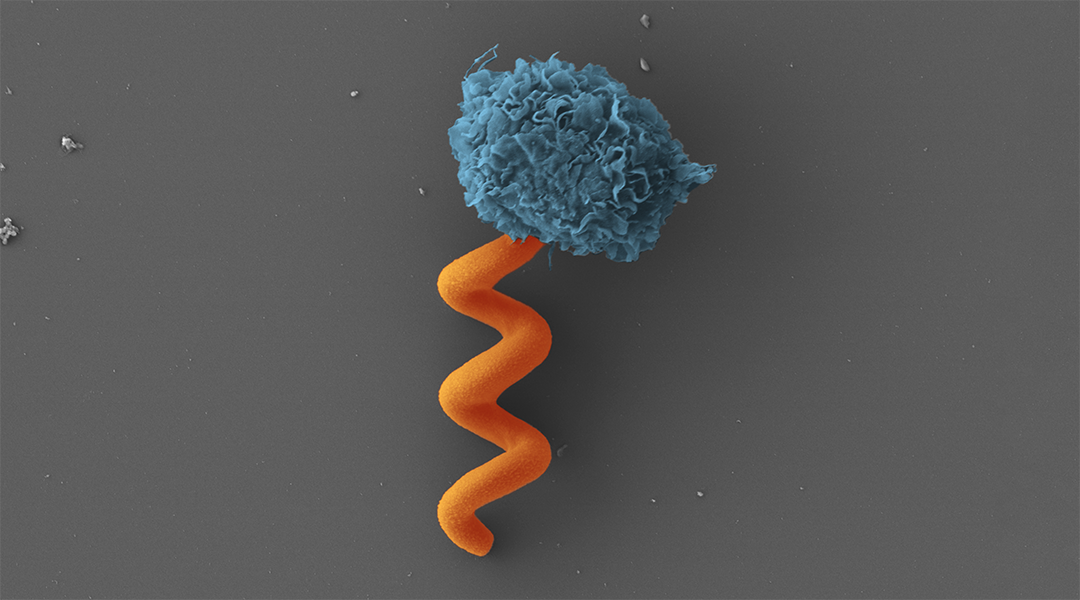 Microrobots have the potential to radically change the future of medicine. Their small bodies and ever-increasing capabilities allow them to navigate complex, confined environments inside our bodies to deliver therapeutics to sensitive, hard-to-reach places. They could mitigate the need for open surgery and minimize the side effects of treatments such as chemotherapy by delivering drugs to specific locations.

While this technology is promising, among the many challenges hindering its clinical application is avoiding the body’s immune system, which is primed to detect and destroy foreign bodies.

“When microrobots enter our body, cells from our immune system detect them as threats and quickly neutralize them via phagocytosis,” said Dr. Abdon Pena-Francesch, a postdoc from the Max Planck Institute for Intelligent Systems, and now a Professor at the University of Michigan. ” Specific immune cells ‘eat’ the robots and take them out of circulation. If your robots are recognized and attacked by the immune system, they will not reach their target site and will not be able to perform their task.”

This has been a longstanding challenge that extends beyond just microrobotics to nanomedicine and drug delivery in general, said Pena-Francesch. To date, researchers have tried to reduce the immunogenicity of drug-carrying entities such as robots and micro- or nanoparticles by modifying their size, shape, and surface chemistry. However, they are always eventually detected, which limits the therapeutics’ effectiveness.

Pena-Francesch and his collaborators Professor Metin Sitti at the Max Planck Institute for Intelligent Systems, Stuttgart, Germany and Professor Salvador Borros from the Institut Químic de Sarrià Barcelona, Spain have recently published a study in the journal Advanced Materials, in which they created microrobots with “stealth” properties to help them evade detection when inside the body.

The researchers stated that a particular problem occurs as a result of non-specific adsorption; when a microbot enters the body, its surface becomes inadvertently coated with weakly interacting proteins that happen to be passing by, and essentially put a target on its back. Immune cells called macrophages are designed to recognize protein-coated materials as threats — as this often happens to pathogens that gain entrance into the body — and eliminate them.

Zwitterionic polymers — polymers that consist of oppositely charged cationic and anionic groups — have shown promise in helping overcome this issue, and according to the team are already finding application in medical implants, drug delivery nanoplatforms, and now, microrobotics.

To create the microrobots, the team used a combination of two zwitterionic polymers that have been shown to have low non‐specific protein adsorption in blood serum and plasma. They were able to assemble complex 3D structures through a photosensitive microprinting process that uses a two-photon polymerization to build a polymeric hydrogel with the help of computer-aided design.

In a proof-of-concept experiment, the zwitterionic microrobots remained undetected for up to 90 hours after exhaustive inspection by macrophages. “Our zwitterionic microrobots repel these [unwanted] proteins due to their charge distribution, avoiding the first steps of immune cell detection and therefore exhibiting immune stealth properties,” said Pol Cabanach, a co-lead author of the paper.

In addition to their stealth properties, the manufacturing process also allowed the researchers to incorporate additional functionalities such as the ability to control their movement through an external magnetic field for tether free locomotion, and light-triggered drug release, which allows the robots to encapsulate and release a drug payload on demand.

“Although there are still many problems to solve before taking these robots to the clinic, this research is a major step in overcoming the challenge of immunogenicity and immune clearance of microrobots,” said Pena-Francesch. “The microrobotics community is extremely active, and every day we see new progress in addressing current challenges with innovative solutions. What it was once science fiction is getting closer to becoming reality. It is difficult to estimate the readiness of this technology for immediate commercial use, but although it is a long term objective, the future is very promising.”

Astronomers estimate there are 36 communicating civilizations in our galaxy
Hall of Fame Highlights: Michael J. Sailor
People prefer voice companions to human-like robots
Image fraud gets a boost from AI