Stability in Polymeric Micelles – Make it a Better Nanomedicine

A recently published feature article discusses the reasons for the poor targeting efficiency via polymeric micelles, and the approaches that have been explored to tackle this problem. 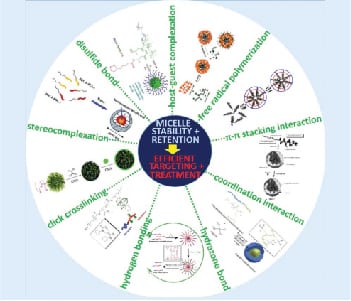 Chemotherapy is an important treatment modality for cancer, however, chemotherapeutic drugs are associated with severe side effects, while their therapeutic efficacy tends to be suboptimal. Targeted drug delivery plays an important role in improving the efficacy of chemotherapy by enhancing tumor disposition of cytostatic drugs while decreasing the accumulation in healthy organs. Polymeric micelles are among the most successful drug delivery systems for targeted delivery. Amphiphilic block copolymers self-assemble in aqueous solution into micelles consisting of a lipophilic core and hydrophilic corona. The hydrophilic corona ensures their physicochemical stability while the lipophilic core can be loaded with hydrophobic chemotherapeutic drugs such as paclitaxel and docetaxel. This makes polymeric micelles highly suitable delivery systems for chemotherapeutic drugs and currently there are more than ten nanoformulations based on polymeric micelles in clinical trials for the treatment of different types of cancers.

Nevertheless, research performed by various groups has pointed out that, although polymeric micelles have shown their pharmaceutical potential, several limitations hamper their clinical translation. The most serious drawbacks include the poor micelle stability and insufficient drug retention in the circulation and biological fluids, which overall result in rapid blood clearance of drug-loaded polymeric micelles and premature drug release, and consequently poor tumor targeting efficiency. 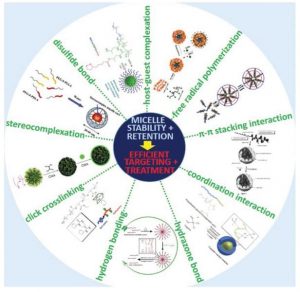