Etching of PET in a plasma has been mimicked in a particle beam experiment by exposing spin-coated PET samples to quantified fluxes ions and atoms. 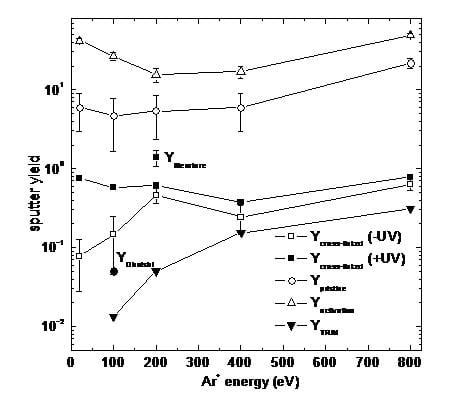 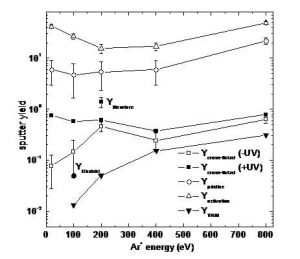 PET etch yields as a function of argon ion energy. The argon ion beam is produced by a plasma source which is also an inherent source of UV radiation.

A research team have mimicked the etching of the polymer polyethyleneterephthalate (PET) in a plasma in a particle beam experiment by exposing spin-coated PET samples to quantified fluxes of argon ions and oxygen atoms.

They analyized their PET thin films using real time in-situ Fourier transform infrared spectroscopy (FTIR). After the onset of the exposure of PET to the argon ion beam, the etch rate was found to be very high, but it decreased rapidly by one order of magnitude afterwards irrespective of the ion energy.

The team found that this slowing down of the etch rate was caused by a transition of the polymer surface into a cross-linked network. The steady state etch yields were orders of magnitude higher than predicted by computer calculations, especially at energies below 400 eV. The addition of oxygen to the incident particle flux did not enhance the etch rate, but only changed the surface composition. At low ion energies, chemical sputtering dominated, causing very high sputter yields. In addition, no threshold ion energy, as in physical sputtering, was observed.

This rather weak energy dependence of polymer etching is able to explain the universality of plasma pre-treatment of PET foils, which does not depend too much on the actual plasma method range from DC-, rf- to microwave discharges although the energies of the species involved in those plasmas may be very different.